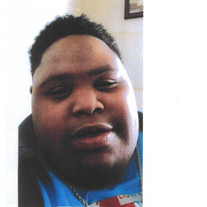 In Loving Memory Of: Zelner Carr was a gift from God to Elton Carr and Cassandra Carr on March 17, 1994 in Detroit, Michigan. Zelner accepted Christ at an early age. Zelner attended Detroit Public Schools. Zelner Carr matured and earned accolades every year of school. In 2012, Zelner Carr graduated from Jerry L. White Center High School with his high school diploma with a great GPA. Zelner Carr's favorite activities and hobbies were bowling, playing UNO, dancing, watching TikTok and movies, and playing on his PlayStation to play 2K20, GTA, and boxing. His favorite basketball team were the Detroit Pistons. He loved to watch movies as in all Tyler Perry (aka Madea) plays and movies. Zelner was the life of the party. He loved to dance and sing. He loved to entertain his family and friends. When he heard music, everyone knew Big Z was about to outshine with his moves and vocals. His heart was full of joy and happiness. He was the sweetest person on Earth with the biggest smile that would brighten the room. Our beloved Zelner was called home to be with the Lord on November 27, 2021. His life will be remembered and celebrated by: his parents, Elton Carr and Cassandra Carr; sisters, Whitney Carr, Bianca Carr, Kasi Carr, Rebaann Thomas; brothers, Justin Carr, Eltion Carr, Elton Carr II; and a host of nieces, nephews, distant relatives, and friends.

The family of Mr. Zelner Earl Carr created this Life Tributes page to make it easy to share your memories.

In Loving Memory Of:
Zelner Carr was a gift from God to Elton...

Send flowers to the Carr family.