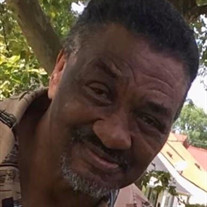 In Loving Memory Of: Willie Lee Johnson, also known as Willie Well Well and Motor City, was born on September 18, 1948 in Damascus, Georgia to the late Willie Lee Johnson Sr. and Velmon Johnson. He was the eldest of four children. He attended the Attapulgus School System. Willie was joined in holy matrimony with Vera Miller for 54 years. To this union 6 children were born. In 1969, he and his family migrated from the south to Detroit, Michigan where he would start a career in manufacturing. Willie accepted Christ in May of 1978 at Faith Tabernacle Church under the leadership of Bishop Morris Thomas Sr. and Pastor Betty L. Thomas where he was ordained and served as a deacon and later under the leadership of Bishop V.R Thomas Sr. After spending over 20 years at National Metal, he would work several jobs before landing his last position at the Bing Group, where he was employed for 14 years. While at the Bing group he held positions as Chief Steward and Union Representative until his retirement in November 2009. Willie was a sharp dresser. He loved himself a nice tie. He had a big personality. He never met a stranger; he would strike up a conversation with anyone. Willie had many layers and he enjoyed life. His favorite sports were baseball, football and basketball. He loved the Yankees and the Tigers, but the Yankees were his favorite team and he always said that he would visit Yankee stadium one day. He enjoyed watching westerns, old movies, listening to old school music, fishing, spending time with his family and the outdoors. What he enjoyed most of all was spending time with his grandchildren. Willie departed this life on November 19, 2021. He was preceded in death by his parents along with his granddaughter, LaJoi. He leaves to cherish his memories: his wife, Vera; his children, Gregory, Kimily, Dexter (Suberina), Marquita, Willie Jr, Tashekia and Devon (Crystal); brother, Edward (Dovie); sisters, Bertha Mae (Roscoe) and Willie Mae, eight grandchildren; three great-grandchildren; a host of nephews, nieces, cousins, godchildren, and friends.

In Loving Memory Of: Willie Lee Johnson, also known as Willie Well Well and Motor City, was born on September 18, 1948 in Damascus, Georgia to the late Willie Lee Johnson Sr. and Velmon Johnson. He was the eldest of four children. He attended... View Obituary & Service Information

The family of Mr. Willie Lee Johnson created this Life Tributes page to make it easy to share your memories.

Send flowers to the Johnson family.