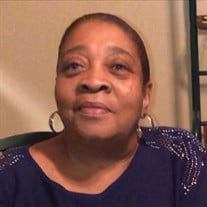 Her Life Verna Mae Jacobs was born December 26, 1949, in Dyersburg, Tennessee to Martin Fowlkes and Ethel Estella Fowlkes. Verna was united in holy matrimony to Clarence Jacobs on January 7,1977, after her first marriage to Robert L. Carmichael (1969), wherein she bore three children. Together, Clarence and Verna raised five children and three grandchildren. Verna was one of the kindest people that you could ever meet. She was extremely family oriented. She loved her children and grandchildren dearly, and she had an individual bond with them all. She meant the world to them, and they meant the world to her. Her own children had to share her love with everyone she encountered. She was the best listener, and she came without judgement. Everyone was always over Verna Mae’s house, as she welcomed everyone. She was truly the Greatest of All Time. Her Love and Service Verna was a dedicated worker, wife, mother, grandmother, aunt, and friend. She graduated from Northwestern High School, Ross Education, and later retired from Detroit Public Schools after 20 years of service. Verna was the rock and glue of her family. She was the life of the party, and if anybody has ever been in her presence, they definitely know what “stamp it” and “you hear me” means. She was a great cook, and you didn’t have to wait for a holiday to have a “holiday meal” because she made them every Sunday. Her food was simply delicious. Verna loved to dance, and she was a music connoisseur. In fact, you might be pleasantly surprised by some of the songs on her playlist. Her Faith Verna gave her life to Christ at a very young age. First Philippians Grace Church was her church home. She instilled the love of God on to her children as well. She made her transition in “perfect peace” while sleeping at home on August 31, 2021. She is already missed dearly. “Ain’t a woman alive that can take our momma’s place.” Her Legacy Verna leaves to cherish her precious memories: husband, Clarence (preceded in death), two sons: Robert and Timothy: three daughters: Michelle (preceded in death), Katrina (Quran), and Tamika; mother, Estella (preceded in death); father, Martin (preceded in death); two sisters: Catherine (preceded in death), Janet; three brothers: Martin (preceded in death), Billie (preceded in death), and Charles (Jennifer), thirteen grandchildren: Jessica, Tiana, Robert IV, Tre, Tobias, Cember, Timothy Jr., Laura, Narrekia, Mia, Ricardo, Jr. (Bear), Theo (Pooda), and Keije; four great-grandchildren: Reiko, Brielle, Blayke, and Malia, a best friend, Lannie Dalton, a special niece and nephew, Billy and Rose (Candy) Key, and a host of aunts, uncles, cousins, relatives, and friends.

The family of Mrs. Verna Mae Jacobs created this Life Tributes page to make it easy to share your memories.

Send flowers to the Jacobs family.