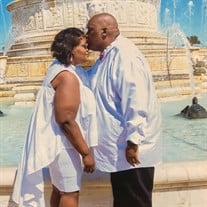 In Loving Memory Of Troy Deshawn Green was born on October 3, 1976 to Katherine Jefferson and Robert Green. He was the fourth child of seven children. He was educated through the Detroit Public School System along with two years of college. Troy was a diligent worker he took pride in everything he did. He made sure whatever he was doing was done right. His mindset was always "If I didn't do it, it ain't right.'' Troy was called the gentle giant, always wanting to make people laugh he had a thing where he would give you a nickname and it stuck with you the rest of your life. In 1996 Troy joined Mt. Sion Missionary Baptist Church where he later became a Deacon and a member of the church choir. Every first Sunday he made it his business to get on the microphone and sing the communion song "I know it was the blood." Troy was a avid video gamer he loved everything about it and was very hard to beat. He introduced his children and brothers to as well and loved spending time playing with his family and friends. But what he loved most was his wife and children. He showed his daughters how to be loved by someone and showed his son how to love a woman. Troy made sure his family was provided for and didn't want for anything. He would often tell the story of how he met his wife. The story would be different every time but in the end you could tell the two loved each other and was glad their paths crossed. He was a amazing son, dependable, loving husband and brother and a knowledgeable father. Troy leaves to cherish his memories: his six beautiful daughters Tylisa, Tatianna, Trinity, Tamya, Tayla and Tori and his only loving son Troy Jr. whom was his roll dog. His mother Katherine (Demetri) Jefferson his father Robert(Tina) Green; three sisters Timika Green, Tiki Green, and Lori Green; three brothers V'Andre (Shawn )Pryor, Pierre Green and Brian Green. Two goddaughters Tawana Harris and Aubrie Harris and a host of nieces, nephews, family and friends. In Loving Memory Of Charletta Denise Green was born on February 23, 1977 to Tonya Harris-Chatman who preceded her in death. She was the oldest of two children. She was educated through the Detroit Public School System. Charletta was a childcare teacher for many years and took care of children as if they were her own. She dedicated her life into making sure that generations after got off to a great start. In 1990 Charletta joined Mt. Sion Missionary Baptist Church where she swore she helped Pastor Milhouse build the choir stand. She was a dedicated choir member, chair director of the youth choir (True Believers); she also took on the roll as Mt. Sion's Mass Choir Director. Charletta was best known for being the "lady who took her shoes off" every time she sang, especially while singing her infamous song "View That Holy City." Charletta instilled Christ into her seven children making sure they knew how to pray and talk to God on their own. She would have her children singing praises to God or doing a praise dance in her living room. Shedding a tear of happiness the children would watch their parents sing and dance together. They were truly a love everyone wanted in their life. She met Troy at a young age letting him know he was going to marry her and she'd be the mother of his children. Although Troy would say it went differently, she already knew she found her soulmate. They were married for 23 years and had seven children all like she predicted. She leaves to cherish her memories: her six compassionate daughters Tylisa, Tatianna, Trinity, Tamya, Tayla, and Tori; her one and only a special gift a son Troy Jr. (Man-Man). Her beautiful baby sister Carla (Lex Harvey); brother Duane Perry; bff/sister Clayling Woods; two goddaughters Tawana Harris and Aubrie Harris; and a host of nieces, nephews, family and friends.

In Loving Memory Of Troy Deshawn Green was born on October 3, 1976 to Katherine Jefferson and Robert Green. He was the fourth child of seven children. He was educated through the Detroit Public School System along with two years of college.... View Obituary & Service Information

The family of Mr. & Mrs Troy & Charletta Green created this Life Tributes page to make it easy to share your memories.

In Loving Memory Of
Troy Deshawn Green was born on October 3,...

Send flowers to the Green family.