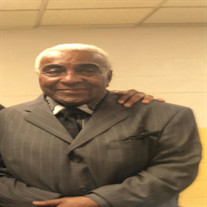 Theodore “Ted” Myles, was born on September 22, 1932 in St. Louis, MO to Lucy Davis and Willie Myles. He was the last living sibling (Woodrow Davis, Joe Myles, Jessie Mae Cooper, Rosie Lee Lorick, and Carl Lee “Bug” Armstrong) all preceded him in death. He was raised in St. Louis and later moved to Detroit, Michigan and was a truck driver until he decided to enlist in the U.S. Army on May 26, 1952. He served in the Korean War and was honorably discharged. He later married Lee Eunice Jones on December 19, 1957. Ted was an electrician for 32 years at Great Lakes Steel and retired on January 1, 1998. He served the Lord faithfully throughout his life and was a dedicated member until the end at Peace Community Church. Ted loved being around family and friends and most of all he loved his family. He loved to sing, travel, and help around the house. He took pride being husband, father, grandfather and great-grandfather. In 2018 he was diagnosed with dementia. He fought so hard to defeat this illness and throughout his sickness he always kept a smile and he still tried to help his family. He became bedridden in July 2021 and succumbed to his illness in his home on August 28, 2021. He leaves to cherish his wife of over 60 years: Lee Eunice Myles, his children Cynthia Doby, Teddy Myles, Gwen Myles, Cornell Myles, Tonya Myles (who preceded him in death 2011), Lawanda Myles (Floyd), Darrin “Dubby” Myers, 9 grandchildren and 2 great-grandchildren. Two goddaughters Jamilah Gill and Venita Solomon. Bonus daughter Courtney. Several nieces, nephews, cousins, and friends. ––––––––––––––––––– Romans 14:8 For if we live, we live to the Lord, and if we die, we die to the Lord. So then, whether we live or whether we die, we are the Lord’s.

The family of Mr. Theodore Myles created this Life Tributes page to make it easy to share your memories.

Send flowers to the Myles family.