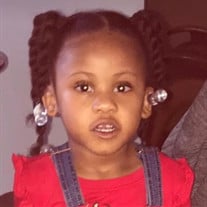 In Loving Memory Of: Tenilah Jhene Bell was born to Terrence “TJ” Bell and Gabrielle “Gabby” Whitley on Friday, December 12, 2014. Gabrielle had such a difficult pregnancy, she spent over 2 months on bedrest at Henry Ford Hospital in Detroit. Through all the health struggles Gabby faced, nothing was more important than to deliver a healthy baby. The wait was finally over. At 3:50pm, Gabby successfully delivered a healthy 5-pound 5-ounce, beautiful baby girl. This was the best day of TJ and Gabby's lives. Tenilah was Christened at St. Joseph Tabernacle on Easter Sunday in 2015. She frequently attended the home church of her mom’s family. The church members went on to become a very special, extended part of family for Tenilah. Although Tenilah was such a happy baby, the family couldn’t help but notice something was different. Tenilah was later diagnosed with autism at the age of two. She started ABA therapy at Centria shortly after. Tenilah had multiple therapists, but one became one of the most important people in her life, Ms. Joyce. She was not only Tenilah’s teacher, but like family. Around March 2021, Tenilah started having seizures. A couple of months later, she was diagnosed with epilepsy. TJ and Gabby did everything they could to get her seizures under control. This was an on-going struggle. Tenilah attended Kindergarten and first grade at Dixon Learning Academy. She loved going to school with all the children. Even with the struggles of autism and limited social skills, Tenilah was welcomed with open arms. Tenilah had many favorites. Her all-time favorite was her iPad. She loved to watch Gabby’s Doll House and Masha and the Bear. She liked to play makeup with her mother and aunts and play doh with her granddad, Robert. She was very flexible and loved to bend and twist all the time. She was a natural gymnast. She absolutely loved water, so bath time was never an issue, until you tried to take her out. She always looked forward to visitation with her cousins. She would get so excited when they would all be together. Tenilah had 2 favorite places she always wanted to be, Chuck E. Cheese and Grandma’s house. On December 18, 2021, God called Tenilah home. She leaves to cherish her memories her parents Terrence Bell and Gabrielle Whitley, great-grandparents, Laura Clark, William and Charlotte Barker, Elmer and Marilyn Holmes, grandparents Robert and Darlene Whitley, Sheushea (Robert) Anderson, Terrence (Jyotika) Hansend, aunts Consuella Bell, Danielle (Terence) Barnes, Laura Whitley, Shaniqua (Muhammad) Spencer, uncles Robert Whitley Jr, Kyjuan Bell, Zakee Howard, Joshua Anderson, cousins Chase Springfield Jr, Reign Bell, Zion Barnes, Teagan Barnes, Morgan Spencer, god parents Bishop Joseph Futch, Jr. and Gwendolyn Futch, Reginald Stewart, Jasmine Elliot, and care-giver Robin Joyce and host of other aunts, uncles, cousins and extended family of those that loved her.

The family of Queen Tenilah Jhene Bell created this Life Tributes page to make it easy to share your memories.

In Loving Memory Of:
Tenilah Jhene Bell was born to Terrence...

Send flowers to the Bell family.