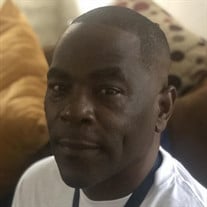 In Loving Memory Of: Steven Bradley Newman better known as "Steve" was born on December 11, 1964 in Detroit Michigan to the union of Henry James Newman Sr. and Lee Mary Newman. They were known to love ones and friends as Hawk and Joann (JoJo). Steven was educated in the Detroit Public School District and was introduced to Christ at an early age. Steve excelled in manual labor. As an adult he utilized his skills in carpentry and contractual demolition. He always had a divine hustle about himself. Steve was a man of few words, but when he spoke it was worth listening to. He was laid back, with an ol' school soul. He always showed an act of selflessness, and was willing to help when needed. He loved fancy cars, bowling, playing cards, barbecuing and fishing with his brother Dwight. He loved spending time with his family, whom he loved dearly. He also loved listening to oldies but goodies from the 60's and 70's era. To know Steve was to know that his four children meant the world to him. Steve never missed a beat when it came to them. He did whatever was necessary to ensure that their needs and wants were met. He took pride in being an amazing father, and made sure to provide them with all of his love. He also made sure to instill in his children the importance of school and becoming successful. Steven, the man with the biggest heart and the brightest smile, who was loved and respected by many will be missed tremendously. Steven Newman departed this life peacefully on Saturday November 27, 2021. He was proceeded in death by his father Henry James Newman Sr.; Mother Lee Mary Newman; Grandparents Johnnie Mae and Charles Watson; Sister Gwendolyn Newman and two aunts Betty Martin and Glendine Singh. He leaves to cherish his four beautiful children, Shantinique Miller (Devante), Brandon Newman, Zakiya Newman and Shamirr Newman; Two granddaughters Brooklynn Miller and London Miller; Omar Rhodes(Step-son); Seven siblings, Dwight Newman, Timothy Newman, Henry James Newman Jr(Tamara) Fredrick Newman, Carl Newman, Mike Newman, Tyrone Newman, and a host of nieces, nephews, cousins and friends.

In Loving Memory Of: Steven Bradley Newman better known as "Steve" was born on December 11, 1964 in Detroit Michigan to the union of Henry James Newman Sr. and Lee Mary Newman. They were known to love ones and friends as Hawk and Joann (JoJo).... View Obituary & Service Information

The family of Mr. Steven Bradley Newman created this Life Tributes page to make it easy to share your memories.

Send flowers to the Newman family.