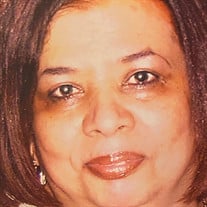 In Loving Memory Of: Sharon L. (Metts) Scruggs was born on April 5, 1954, in Providence R.I. to the late Joseph D. Metts Jr. and Helen R. (Wilkinson) Metts. Sharon was the third child born to this union. As a child, Sharon was outgoing, inquisitive and didn't mind letting you know how she felt (lol) and also had a great love for animals. She loved traveling to New York every summer to visit her Nana Bennett and enjoyed swimming at the neighborhood pool. Sharon grew up as a devout Catholic, who attended Parochial School as a child and graduated from Central High School, class of 1972. Sharon was a huge New England Patriot’s fan and she loved shopping. In 1982, with her son Walter, Sharon joined her cousin Lorraine Byas in Detroit, MI. Lorraine introduced Sharon to James D Scruggs Jr. and on July 16, 1983 they wed. To this union one child was born, Brandon Scruggs, and between the two of them they have a total of 6 children. Sharon had a career as a bank teller at Comerica Bank, where she consistently was at the top of the chain in Sales and received numerous accolades for her yearly performances. She forged many relationships during her tenure at the bank, that included both customers and coworkers. Sharon retired from Comerica in 2008. Preceding her in death are her parents, Joseph and Helen, her sister JoAnn Metts, grandson Miguel Scruggs, maternal grandparents Harold and Alice Wilkinson and paternal grandparents Joseph Metts Sr. and Mable (Hall) Metts-Bennett. Sharon leaves behind her husband James; sons Walter Miller-Metts and Brandon Scruggs of Detroit, MI and bonus children Darryl Scruggs, Felicia (Jerome) Smith, Crystal Scruggs, all of Detroit, MI and James Scruggs III of College Park, GA; her brother Harold (Dayus) Metts Sr. of Providence, R.I. and her sister Helen R. Silva of Detroit, MI; grandchildren Deshawn, Lashayla, Hydia, Shane, Tajir, Toriyona, Taliyah, Trevion, Darryl, Delshon and Davon and bonus grands Chase and Blake; great-grandchildren Alyssia, Saniyah, Amiyah, Chance and Ja'ir; nieces and nephews Harold Jr., Stephen, Darren Sr., Scott, Jade, Elena and Alejandro; godchildren Leilani, Ty'Ona, Rachanda, Dion and Sharnia and a host of great-nieces, nephews and friends.

In Loving Memory Of: Sharon L. (Metts) Scruggs was born on April 5, 1954, in Providence R.I. to the late Joseph D. Metts Jr. and Helen R. (Wilkinson) Metts. Sharon was the third child born to this union. As a child, Sharon was outgoing, inquisitive... View Obituary & Service Information

The family of Mrs. Sharon Lee Scruggs created this Life Tributes page to make it easy to share your memories.

In Loving Memory Of:
Sharon L. (Metts) Scruggs was born on April...

Send flowers to the Scruggs family.