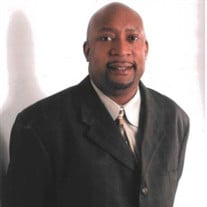 In Loving Memory Of: Sean Dominic Frazier (Flip) was the youngest son born to the late John and Brenda Frazier on June 27, 1968, in Detroit, Michigan. He was educated in the Detroit Schools and graduated from Henry Ford High School in 1987 specializing in the Culinary Arts. Culinary Arts was always his passion. In fact, he was one of the first to design and sculpture fruit trays before they became popular in Detroit. Cooking was an ongoing competition in the Frazier household, as there were numerous heated conversations about who was the best cook! In addition to preparing delicious meals, Flip as he was affectionately called, also excelled as a landscaper. His favorite hobbies included playing basketball, horseshoes, dominoes and bowling. Flip could always be found joking with his Mansfield Street Family and traveling with his best friend Darryl Massey. Pursuing his passion in hopes of becoming an entrepreneur, Sean moved to Atlanta, Georgia. He later migrated to Columbus, Ohio where he was employed by the State of Ohio. Sean later decided to move with his family to North Carolina in pursuit of a better life. Never giving up on his dream to become an entrepreneur he returned to Carrolton, Georgia, where he was employed as a dietician at Tanner Hospital. He also worked as the groundskeeper for Westwoodward Campus Housing at the University of West Georgia. Due to his failing health, he returned to Detroit where he remained until his untimely transition on May 31, 2021. Sean was a loving and dedicated father to his son, Tarrell Jackson born to him and Tara Jackson and to his daughter, Shi’Ann Frazier born to him and D’endrea Frazier. Memories of Sean Domonic Frazier will be cherished by his son, Tarrell (Tia) Jackson; his daughter, Shi’Ann Frazier; longtime companion, D’endrea Frazier; sister, Kimberland Jackson; brother, John Frazier (Dewanda); grandchildren: Maryion Snyder, Tahj Jackson, S’naiya Eirosius and Chance Scott; uncle, Ronald Turner; nieces: DeLandrea Wilson, D’iEra Wilson, Sheridynn Frazier, Chelsa Atkins, and Janae Dukes; nephews: DeAndre Wilson, John Jackson III, Jalen Dukes and Jaden Dukes; four great-nieces, four great-nephews; special relatives: Sheila Howard, Dasheena McAllister, Gentsey Howard and Ishmael Howard; and a host of family and friends.

In Loving Memory Of: Sean Dominic Frazier (Flip) was the youngest son born to the late John and Brenda Frazier on June 27, 1968, in Detroit, Michigan. He was educated in the Detroit Schools and graduated from Henry Ford High School in 1987... View Obituary & Service Information

The family of Mr. Sean Domonic Frazier created this Life Tributes page to make it easy to share your memories.

In Loving Memory Of:
Sean Dominic Frazier (Flip) was the youngest...

Send flowers to the Frazier family.