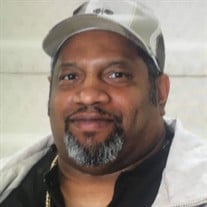 In Loving Memory Of: Samuel “Bookie” Quinton Biggens Jr. was born February 07, 1952 in Detroit, MI to Samuel Walker Biggens Sr. and Lucy Ann Ford Rucker Biggens. Samuel was introduced to and accepted Christ at an early age. Bookie was educated in the Detroit Public School System, and as a Southeastern Jungaleer, Sam was a part of the Track and Field program. It is here that he met and dated Maria Dorsey. After Samuel’s graduation in 1969 the two decided to separate. Not long after, through mutual friends, Samuel was introduced to Shirley Lockett and in 1971 they were married. To this union, two children were born (Quinton and Shelley). During their marriage, Samuel worked for Chrysler and he also became a Pipe-fitter through local 636 apprenticeship program. Utilizing the training that he had obtained and Shirley’s business sense, they acquired and managed over 15 rental units. After 17 years of marriage, Samuel and Shirley divorced. When Bookie and Maria rekindled their relationship, she had a son (Christian) whom Samuel accepted and loved as if he were his own. Being a fan of education, Samuel utilized the offer from Chrysler that allowed him to obtain his Associate, Bachelor and Master’s Degrees from Baker College. In 2007, with 30 years of service, Samuel retired from Chrysler and not long after that he retired from the Pipe-fitters Local 636. Bookie loved music, television and online shopping (lol). If at any time you called him, you would likely hear either the news, a game (basketball was his favorite he loved the Pistons) or some random SyFy movie he had found playing (loudly) in the background. Above all of these, Samuel enjoyed spending time with his family. It warmed his heart to laugh and talk to his relatives which is why Bookie was typically the one to keep in touch with everyone. After years of battling with various health issues, Samuel was called home November 14, 2021. He was preceded in death by his parents (Samuel and Lucy), his ex-wife (Shirley), an older brother (Floyd) and a younger sister (Joyce). Samuel leaves to cherish memories: his significant other, Maria; his children – Quinton (Erica), Shelley (Keif) and Christian; his grandchildren, Arianna, Ajah (Martel), Sasha, Layla and Olivia; His siblings James “Bobby”, Eloise, Thomasina (Cornelius), Gerald (Beverly) and Brenda along with a host of nephews, nieces, cousins and friends.

The family of Mr. Samuel Quinton Biggens Jr. created this Life Tributes page to make it easy to share your memories.

In Loving Memory Of:
Samuel “Bookie” Quinton Biggens Jr. was...

Send flowers to the Biggens family.