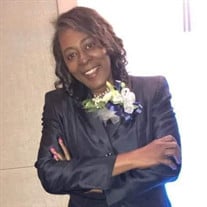 In Loving Memory Of: Rosalyne Simpson was the first child born to LC and Margaret Craig on November 30, 1956, at Harper Hospital in Detroit, Michigan. Both of her parents preceded her in death. “Robbie”, as she was affectionately called was educated in her early years in the Detroit Public School System. She graduated from Thomas M. Cooley High School in the year of 1975. She then extended her educational endeavors as she studied at Oakland Community College in Bloomfield Hills, Michigan where she received her associate degree in Business Administration with a concentration in accounting. She then went on to study accounting at Lewis College of Business in Detroit, Michigan. Rosalyne accepted Christ in her youthful days and was baptized at Unity Baptist Church in Detroit, Michigan. She was actively involved with the Scholarship Committee and Trustee Board until her passing. In 1984 Rosalyne married Malcolm Gerald Simpson on November 13, and to this union one daughter was born, Sicoya Sterling Simpson on December 10, 1984. They were married for 28 years before Malcolm preceded her in death in 2012. In 2013 she moved to Chanticleer Condominiums in Southfield, Michigan, where she served on the Board of Directors for the condominium association. Rosalyne was employed at Delphi a subsidiary of General Motors Corporation as a data analyst. She then went on to work with EDS (Electronic Data Systems) also affiliated with General Motors Corporation as a data analyst, in which she was employed for over twenty-plus years. Rosalyne then retired at the age of fifty years old in 2006. Because of her love for working and helping others, she accepted a position at Hope Academy in Detroit, Michigan as an accountant. Rosalyne Simpson had a life in which she helped so many in the community. With that passion, she became a member of Gamma Mu Chapter, Gamma Phi Delta Sorority, Inc. on July 19, 1987. Gamma Phi Delta strives to improve the economic, social, and political status of all women to motivate the members to further their education/training and maintain a better relationship among women of all races and creeds. This is what Rosalyne Simpson’s character consisted of. During her tenure within the organization, Rosalyne held prominent roles such as Chapter President, Vice President, Treasurer, Youth Advisor, and Editor. Rosalyne was also very active in her daughter’s educational life as she participated in her cheerleading, DAPCEP, girl scouts, and the parent association at Cass Technical High School. Sicoya was the apple of her eye. Rosalyne was a woman that loved family. She enjoyed hosting family gatherings, taking trips, and spoiling her grandchildren. She hosted so many events at the house on LaSalle and Woodstock. She loved Jazz and frequented many jazz concerts. She also loved to dance. Her favorite dance was “THE WOP”, a family dance that her baby brother Lernardo created. Rosalyne departed this life on Sunday, April 3, 2022 in the comfort of her home, surrounded by her loving family. She leaves to cherish her memory: Daughter, Sicoya (Herbert) McKinnon, Son, Malcolm (LaShawna) Simpson, and Godson Antoine Morrison. Six siblings; Anthony (Rebecca) Craig, Aaron Craig, Lernardo Craig, Nicole Craig-Kirksey, Norma Hopson, Sylvester (Elaine) Smith; sisters-in-law, Sharon Simpson and Rosalind Simpson; grandchildren, Herbert McKinnon, Jr., Madison Simpson, Skylar Simpson, and Teagan Simpson; Close girlfriends Jackie Fuller-Malcolm and Veneda Fox-Sanders and a host of nieces, nephews, great-nieces, great-nephews, cousins, and many friends.

In Loving Memory Of: Rosalyne Simpson was the first child born to LC and Margaret Craig on November 30, 1956, at Harper Hospital in Detroit, Michigan. Both of her parents preceded her in death. &#8220;Robbie&#8221;, as she was affectionately... View Obituary & Service Information

The family of Mrs. Rosalyne Simpson created this Life Tributes page to make it easy to share your memories.

In Loving Memory Of:
Rosalyne Simpson was the first child born...

Send flowers to the Simpson family.