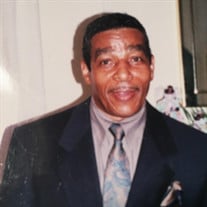 In Loving Memory Of Robert Dent Jr. was born on May 1, 1933 in Union Springs, Alabama to the union of Robert Dent Sr. and Sadie (Ladybird) Sigers. Robert grew up in Detroit’s historic Black Bottom and Paradise Valley neighborhoods and attended the Detroit Public School system. During his teen years Robert did migrant work between Florida and Alabama. In 1953, he joined the army, serving during the Korean War. He earned several medals: The United Nations Service Medal for Korea, The Korean Service Medal, The Nat’l Defense Service Medal, and The Good Conduct Medal before being honorably discharged. In 1956, he married the love of his life Beatrice Horton. To this union four children were born. Robert worked as a chef for Suffrage Air Force, Wayne County Youth Center, as a butcher for several markets and as a chef for Wayne County jail systems in which he retired. Robert was self educated and became a jack of all trades. He was a talented artist, a craftsman, a connoisseur of music and a phenomenal cook. Robert was a devoted husband, father, and grandfather who will be dearly missed. Robert departed this world on July 10, 2021. He was preceded in death by his wife of 61 years Beatrice; his parents Robert Sr and Sadie; and sister Leola. He is survived by his children: Ramona, Robert III (Genenee), Joseph (Lois), Rayford (Nicole). Grandchildren: Robert IV, Jazmyn, Raneka, Rayford Jr, Nicholas, Nolan, and Nigel; great-granddaughter Mahalia and a host of loving relatives and friends.

In Loving Memory Of Robert Dent Jr. was born on May 1, 1933 in Union Springs, Alabama to the union of Robert Dent Sr. and Sadie (Ladybird) Sigers. Robert grew up in Detroit&#8217;s historic Black Bottom and Paradise Valley neighborhoods and... View Obituary & Service Information

The family of Mr. Robert Dent, Jr. created this Life Tributes page to make it easy to share your memories.

Send flowers to the Dent, family.