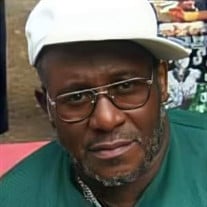 Robert Wayne Billinger January 14, 1951 - March 24, 2022 Robert Wayne Billinger, lovingly known as Wayne, was born January 14, 1951 in Bronx, New York to the marital union of Saludy Murphy and Robert Billinger, who preceded him in death. He was the youngest of three children (Mary Lou and Vera) who also preceded him in death. As a young man, Wayne loved his family, sports and cars. In school, he was known as “bob” and excelled in lacrosse and football. He went on to play football at AT&T in North Carolina, until an injury caused him to return to New York, where he pursued an Associate’s Degree. He later married Rita Billinger and acquired a daughter (Marsha) and had two sons (Robert and John) and one daughter (Lakisha). In 1993, he moved to Michigan, and lived with family. Wayne was a jack of all trades. He became a healthcare professional and began working at Botsford (Beaumont) Assisted Living. There, he met Betty Peoples and they grew to be close friends. She introduced him to Pastor Priscilla Murrell at JAWS for Jesus Mission in 1996. There, he met Doretha Blackmon. They fell in love and were married a year later on June 14th, 1997. Through this union, he gained two sons (Brian and Marcus) and one daughter (Kristina). He enjoyed working for Radclift Inc. He was an active Board member and advocate. While working at Radclift Inc., he also worked for Macomb Mental Health, where he developed a close relationship with David Diesing. David spent many nights in his home and traveled with him and Doretha on vacations. Wayne lived a life of service. He ministered at Christian Love Tabernacle of Holiness, Higher Praise, and JAWS. He did street and prison ministry, and he established a youth ministry (Warriors for God). Wayne was a loving, caring, and outgoing person with a big heart. He loved traveling and exploring different restaurants, in other words, he loved to eat! He was a car cruiser and enjoyed collecting classic cars. On Thursday, March 24th, 2022, Robert was called home. He leaves behind to cherish hi memory, hi wife of 27 years, Doretha; 4 sons, Robert (Shaunice), John (Tyheshea), (Rochelle), Brian (Tamera), and Marcus; 3 daughters Marsha, Lakisha (Dallas), and Kristina (Eric); Aunties, Uncles, a God daughter, a host of grand children, great-grand children, nieces, nephews, cousins, and friends.

The family of Mr. Robert Wayne Billinger created this Life Tributes page to make it easy to share your memories.

Send flowers to the Billinger family.