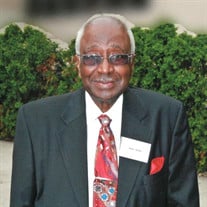 Richard Allen Reid was born July 10, 1927 in Garnett, South Carolina to William Arthur Reid and Katherine Beatrice Jenkins. Richard accepted Christ at an early age and was a member of New Mt. Zion Missionary Baptist Church. Richard graduated from Miller High School in Detroit, Michigan and joined the Navy during World War II from 1945-1946 and joined the Army, during the Korean War from 1950-1952, being honorably discharged as a Corporal. In 1982, Richard retired from the U.S. Army Tank Automotive & Armaments Command (TACOM), in Warren, Michigan as a Logistic Management Specialist. He attended Michigan Tech Electrical School and received certification as an Engineering Technician from the Professional Engineering Association. Richard attended many classes in Fort Lee, Virginia while furthering his career at AM General and XMCO Inc. as a Defense Contractor. Richard attended Real Estate School and received his license as a Broker. After his retirement, in 1985, he opened his own business, RA Reid & Associates Realty. He and his wife, Barbara, enjoyed traveling in and out of the country, with Aruba being a favorite repeated destination spot. Richard was the Past Master of Doric 22 Prince Hall Free Masons and was a member of the Shriners. Richard was joined in holy matrimony with Leora Goodwin, whom preceded him in death in 1983. To this union (1) child was born, Richard Allen Reid II. Richard found love again and married Barbara Grant in 1989. Richard departed this life on April 2, 2022. He was preceded in death by: (4) siblings, Willa Bee, Alphonso, Harold and Henry; (1) step-daughter, Pat. He leaves to cherish in his memories: his wife of 32.5 years, Barbara; one son, Richard II (Brenda); one sister, Selena; one sister in-law, Bunnie; two stepsons, Clyde (Erma), Charles; two step daughters, LaDonna (Terry) and Barbara; and a host of grandchildren, great-grandchildren, nephews, nieces, cousins and friends.

The family of Mr. Richard Allen Reid created this Life Tributes page to make it easy to share your memories.

Send flowers to the Reid family.