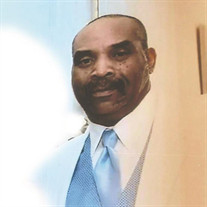 In Loving Memory Of: Ricardo Bruce Rice was born on November 20, 1952 in Detroit, MI to the late Del Rio and Samson Nero. He has two brothers, Raymond Nero and Lavelle Nero. Ricardo accepted Christ at an early age. Ricardo attended Northwestern High School in Detroit, MI. He married his high school sweetheart, Denise Hamilton. In that union they raised five children. While in high school, Ricardo found his passion for music. He joined the glee club and joined in a band with Ray Parker Jr. Later on Ricardo joined the plant life, with General Motors but realized that the road was where he belonged and joined S&L Transportation because he loved to drive. Ricardo had a big personality that’s where he got his nickname, Rico. Always joking and playing, Ricardo enjoyed life and being with his family, especially the times he spent with his sons and his brother. Ricardo passed away peacefully on November 13, 2021. Ricardo leaves to cherish his memory: Denise Rice; four daughters, Nya Keller, Sandra Rice, Tanya Rice and Crystal Collins; two sons, Ricardo Rice Jr. and Mario Rice; grandchildren, Ray Vaugh Freshly, Keonte Lindsay, DeMarionte Lindsay, Ricarte Jenkins, Edwin Jett Jr., Ricardo Freshly, Ricky Rice, Steven Green, Mario Smith Jr., JaCarria Rice, Makayla Daniels; two nieces, Raynisha Nero and Laneisha Nero; two special friends, Spring Curry and Lisa McCreary; and a host of great-grandchildren, family and friends. •••••••••••••••••••••••••••••••••••••••••••• I’m Still Here I may be gone but please don’t cry Death is not the last goodbye Death releases me of my pain There will come a day we will meet again Don’t be blue and don’t be said Think back to the fun we had I am always here I hear you speak In time of trouble it’s me you seek You don’t see me but I see you I will do my best to pull you through Speak to me and I will hear Never far I am always near Be brave my loved ones do not cry See you again it’s not goodbye

The family of Mr. Ricardo Bruce Rice, Sr. created this Life Tributes page to make it easy to share your memories.

In Loving Memory Of:
Ricardo Bruce Rice was born on November...

Send flowers to the Rice, family.