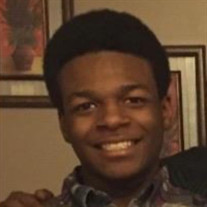 In Loving Memory Of Rayford Raemon Dent II (RJ) was born on July 17, 1996 to parents Rayford Michael Dent Sr. and Nicole Estelle Dent in Detroit, Michigan. When he was about age 2 his favorite toy was Barney the dinosaur, he went no where without his Barney, and from that he developed a fascination with dinosaurs, learning all the names of prehistoric dinosaurs. As a youth he participated in various sports: soccer, baseball, basketball, and karate. He displayed athleticism and competitiveness every time he stepped on the field or court. RJ accepted Christ at an early age and was a member of Triumphant Life Christian Church where he served as a youth Usher. He attended Detroit Public Schools until later transferring to Redford Union High School where he excelled in math and graduated with honors, not only a scholar, but an athlete also, on the cross country track team. After graduating high school he proceeded to attend Henry Ford College, where he acquired credits towards a major in Engineering. RJ was very independent, very dependable, reliable, kind and generous. Always helping out where needed. He was diligent and consistent when it came to working, he always had a job. He worked a variety of jobs before obtaining employment with General Motors, which he planned to use as a stepping stone in pursuing a career in engineering. He had multiple hobbies which included reading, taking walks, basketball, video games, and hanging out with his cousin Dion. RJ was excellent at managing his money and saved up to get his own apartment and buy his own car. Such a precious life, gone too soon, who had a significant impact on everyone he encountered, but he will live on in our hearts and memories. We know that he is in good hands now, God’s hands. Rayford II departed this life on February 27, 2022. He was preceded in death by: grandparents, Robert and Beatrice Dent, Harry Kurtz and Johnnie Etta Johnson; uncles, Javon Johnson and Robert Maynard Dent III. RJ leaves to cherish father and mother, Rayford and Nicole Dent. Sister and brothers, Raneka, Nicholas, Nolan, Nigel and Charles Taylor. Also a host of aunts, uncles, cousins and friends.

In Loving Memory Of Rayford Raemon Dent II (RJ) was born on July 17, 1996 to parents Rayford Michael Dent Sr. and Nicole Estelle Dent in Detroit, Michigan. When he was about age 2 his favorite toy was Barney the dinosaur, he went no where without... View Obituary & Service Information

The family of Mr. Rayford Raemon Dent, II created this Life Tributes page to make it easy to share your memories.

In Loving Memory Of
Rayford Raemon Dent II (RJ) was born on July...