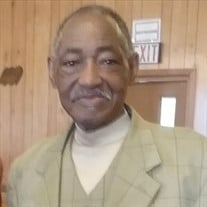 In Loving Memory Of Otto Dennis (OD) Tyson departed this life on Thursday, December 23, 2021, at home, surrounded by family. Otto was born in Caney, Arkansas, on September 14, 1932, to Otto D. Tyson and Queenie Robinson Tyson, who preceded him in death. They instilled the love of God in him at a very early age. Throughout his life, this love would be the lamp unto his feet and the light unto his path (Psalm 119:105). OD was too energetic for confinement within the walls of a classroom. So, at the tender age of 14, he swapped the books for a job on the Southern Railway Lines. There he worked as a busboy, helping the porters. He saved up for his first car at age 16. And at 18 years old, he headed north to Detroit, Michigan. He worked for General Motors in Pontiac and retired after 32 years. Since the “Jack Rabbit” couldn’t sit still for long, he bought, fixed up, rented, and sold houses for a few years. Then, he started a snow removal and landscaping business and later added scrapping services. His self-started enterprise allowed him to train, employ, and mentor young workers throughout the years, even up to the last months of his life. A devoted husband and father, Otto was known by many for his energetic and outgoing personality. He was a kind and driven man who never let an opportunity pass by to greet a new friend, say howdy, and ask about their day. Everyone who had the privilege of meeting and knowing Otto D. Tyson will remember him for his humble, caring, and generous spirit. And most of all, for his “du-de-du-de-doo” tunes as he went about his day. He accomplished more in the early morning hours than most people did all day! Failure was not an option, and he lived life with a purpose. Otto married his first wife, Erma Helen Dillahunty Tyson in 1953, and had three daughters. Two daughters, Anna Hardiman and Wilma Tyson preceded him in death, as did Erma. Otto and Mildred Lawrence Tyson were married on June 3, 1978. And for the next 43 years, they shared a life filled with joy, true companionship, and laughter. The lamp to his feet led OD to join Messiah Missionary Baptist Church in Pontiac in the 1960s. He was a founding member of Greater Saint Paul MB Church in 1968, with Reverend Hirsch. He maintained his membership at Saint Paul and, under the leadership of Pastor Hillie, he became an ordained Deacon on December 20, 2015. Otto joined Mount Vernon Lodge #4, where he rose to the degree of Master Mason in 1980. Notably, in 1983 during his tenure with the Lodge, OD received two acknowledgments followed by several accolades throughout the years. Surviving OD is his loving wife, Mildred. Left behind to cherish his memory are his two daughters, Edna (A.D) and Delphine, and two sons, Michael (Dionna) and Kenny (Renay). His grandchildren include M. Dennis, Latonia, Frank Jr., Tyra, Ashley, Jeronda, Aaron, Isaac, DeJanae, Joanna, Irma, Chala, and Mikel. His 14 great-grandchildren and three great-great-grandchildren will remember him fondly. OD is also survived by his siblings Thelma, Clavern, Bettie, Phynis (Lavada), Lloyd Sr., Jimmy (Sharon), and Marvis; and sisters- in-law Earlene, Verna (Ralph), and Debra. His memory will continue to live on through his many loving nieces, nephews, cousins, church family, mason brothers, neighbors, innumerable friends, and all, who will forever be counted as special parts of his life. Otto was sadly preceded in death by his twin brother Dale, brother Odis Sr, sister Laura (Nelson), granddaughter Terrylynn, son-in-law Tshikangala (Delphine’s spouse), father and mother-in-law Robert and Anita, brother and sisters-in-law Harold (and Katie), Isabella (Chester), and Carolyn. OD said, “Don’t scream, holler and cry for me; just remember that I’m not in any more pain.” Revelation 21:3-4 says: “And he will wipe out every tear from their eyes, and death will be no more, neither will mourning nor outcry nor pain be anymore. The former things have passed away.” With this said, we long and pray for the day when we will see our husband, father, brother, uncle, and friend OD again.

In Loving Memory Of Otto Dennis (OD) Tyson departed this life on Thursday, December 23, 2021, at home, surrounded by family. Otto was born in Caney, Arkansas, on September 14, 1932, to Otto D. Tyson and Queenie Robinson Tyson, who preceded him... View Obituary & Service Information

The family of Mr. Otto Dennis Tyson created this Life Tributes page to make it easy to share your memories.

Send flowers to the Tyson family.