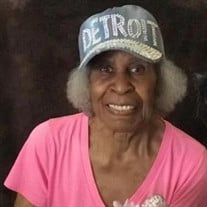 In Loving Memory Of Independent, classy, outspoken, and giving…those are just a few words that describe Olivia Harrington-Nichols (affectionately known as Bill). Born on August 18, 1928 in Ecorse, Mich., to Morris and Evora Fowlkes, Olivia was the third of eight children. She enjoyed a loving childhood with her brothers and sisters often helping them with their homework and chores. Olivia attended Ecorse Public Schools and excelled academically. She later married Arthur Harrington and welcomed their son Arthur Jack Harrington (affectionately known as Jackie) on August 13, 1944. The young family would often host family gatherings in their beautiful home where guests enjoyed special treats like homemade ice cream and dance contests. Although their marriage would not last forever, they enjoyed watching Jackie grow into adulthood and were proud of his accomplishments as a Detroit Police Officer. She later remarried and enjoyed a brief, loving relationship with Jeffrey Nichols. Olivia was fiercely independent and an advocate for enjoying the finer things in life. Her career as a Jack Hammer Operator at Great Lakes Steel afforded her the opportunity to create an immaculate home and give to family members in need. She would often give clothes to her nieces and nephews and always had an open door for those who wanted a warm meal. Known for her keen sense of style, she often received compliments for her beauty and fashion. She carried great pride in her home and appearance, a trait that was passed on to her son and grandchildren. A devout Christian, she accepted Jesus as her Lord and Savior and was a member of New Mt. Hermon Baptist Church. Olivia transitioned to heaven on August 10, 2021. She leaves to celebrate her life: brother Thurston Fowlkes; her grandchildren Marcellus, Lanell (preceded her in death) LaJan, Jacqueline and Jack; and a host of great-grandchildren, nieces and nephews including her loving niece Shirley Benson who cared for her during her final days. Her son Arthur J. Harrington preceded her in death along with her brothers and sisters: Elizabeth Dockery, Morris Fowlkes (affectionately known as Son), Verion Fowlkes, Cornelia Derickson (affectionately known as Neal), Jake Fowlkes and Carlton Fowlkes.

The family of Ms. Olivia Harrington-Nichols created this Life Tributes page to make it easy to share your memories.

In Loving Memory Of
Independent, classy, outspoken, and giving…those...

Send flowers to the Harrington-Nichols family.