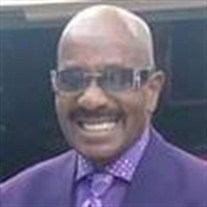 In Loving Memory Of Norman Hawkins, affectionately known as “Hawk”, was born to the late James and Eloise Hawkins on July 28, 1940. He was the fifth of six children; his brothers James (Jun-boy), Donald and Edward preceded him in death. Hawk loved life and was the kind of person who never met a stranger. Always “sharp as a tack” and “cleaner than the board of health,” he was known to show up at even the most casual event wearing gators and a ring on almost every finger. All of his nieces and nephews knew Uncle Norman would be at the family event sharp as he wanted to be, but ready to pitch horse shoes and play spades with the best of them. To know Hawk was to love him because of his great sense of humor and gift for gab. Hawk met Juanita Spratling in March 1983 at Unity Baptist Church and they were married that September. They were inseparable. Everyone knew that he was “her honey”. Hawk didn’t like airplanes, but Juanita did talk him into flying to Mexico on vacation in 1988. They also drove to Chicago several times and even traveled by train to Las Vegas. They joined Oak Park Community, Culture and Commerce and participated in several field trips, including attending the opera. To everyone’s surprise, Hawk loved the opera. Hawk liked the finer things in life and worked hard for them. He retired after 30 years at Chrysler, and most of those years he worked the midnight shift. After retirement, he discovered bowling, which was a passion he shared with his grandson, Joshua. Hawk was a great bowler who was sought after to participate in many leagues, and won several awards over the years. He even bowled a perfect 300 game. Knowing the importance of having Christ in his life (due to the fervent prayers of his wife, Juanita), Hawk accepted Christ as his Lord and Savior in 1992 at Word of Faith International Christian Center. A true giver, Hawk frequently donated to several charities, especially those concerning children (St. Jude Children’s Hospital was his favorite). Norman leaves to cherish his memory his beloved wife of 38 years, Juanita; daughters, Tonya, Toy, and Suzy; son-in-law, Clinton (Tonya), who took special care of him during his last days; sisters Barbara Jean and Yvonne; sisters-in-law, Janice and Gwen; brother-in-law, Kenny; grandchildren, Joshua, Seneca, Jeffery, and Stormi-Reed; 5 great-grandchildren, and a host of nieces, nephews, and friends.

In Loving Memory Of Norman Hawkins, affectionately known as &#8220;Hawk&#8221;, was born to the late James and Eloise Hawkins on July 28, 1940. He was the fifth of six children; his brothers James (Jun-boy), Donald and Edward preceded him in... View Obituary & Service Information

In Loving Memory Of
Norman Hawkins, affectionately known as “Hawk”,...

Send flowers to the Hawkins family.