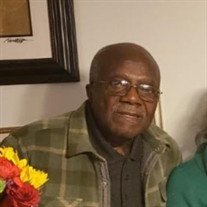 In Loving Memory Of: Bro. Monroe Harris was a man of few words and enormous impact. He cherished family, faith, financial stewardship and food. He was one of twelve children born to the union of the late Everette and Macy Harris in Wilkesboro, North Carolina. He attended Lincoln Heights School, a Rosenwald school which was a partnership between a Jewish Man, Julius Rosenwald, and Booker T. Washington, to offset the under funding of public education for African-American children in the South. This partnership provided an opportunity to better one’s self and that is exactly what Monroe did. In 1950, he moved to Detroit, Michigan and was employed by General Motors. He worked 30 years at Chevrolet Gear and Axle and retired in 1981. He was an avid outdoors man and enjoyed hunting,  pitching horseshoes, playing checkers and shooting pool. One of his favorite things to do was to eat good food and he was blessed to have an exceptional cook as his life-long partner. Monroe married the love of his life, Lillie “Bernice”, from Moravian Falls, NC on December 31, 1959 and shared 61 years of love and marriage. Three children were born to this union: Richard Alan (who preceded him in death), Dennis O’Neal and Lisa Michelle. Monroe enjoyed spending time with his family and worked hard to teach his children the value of hard work, the importance of taking care of what they owned and the inseverable ties they have to be one another’s keeper.  Monroe was an excellent craftsman and skilled painter too. He also believed in staying active which included riding his bicycle and mowing his lawn even into his 90’s. He was also steadfast in his faith. Growing up in Thankful Baptist Church of Boomer, NC, Monroe knew the importance of having a Bible-based church home.  He was a proud member of Messiah Baptist Church where he joined under the leadership of Rev. T.C. Simmons.  In later years, Monroe served on the usher board and participated in senior activities. He leaves to cherish his memory, his loving wife Lillie; son Dennis; daughter, Lisa; three grandchildren (Nicholas, Brandy and Loreal); one Goddaughter LaTosha Glenn (Robert), sister Betty Vick of Wilkesboro, North Carolina and a host of nieces, nephews and friends. Matthew 7: 20 - Wherefore by their fruits ye shall know them.

In Loving Memory Of: Bro. Monroe Harris was a man of few words and enormous impact. He cherished family, faith, financial stewardship and food. He was one of twelve children born to the union of the late Everette and Macy Harris in Wilkesboro,... View Obituary & Service Information

The family of Mr. Monroe Harris created this Life Tributes page to make it easy to share your memories.

Bro. Monroe Harris was a man of few words...

Send flowers to the Harris family.