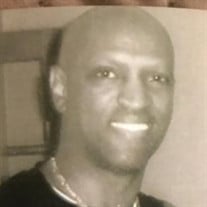 In Loving Memory Of: Michael Andre Coles was born in Detroit, Michigan, on November 13, 1956. Mike was the 7th child born of Roy and Ernestine Coles whom both precedes him in the afterlife.  Educated in the Detroit Public Schools, Mike obtained his General Education Diploma from the State Board of Education on October 28, 1983.   Michael met and married Christine Thomas October of 1977 and in that union they had two children; Nathanyah Coles and Rakhel Coles-Moore.  This union was dissolved after five years.    In 1988, Mike began a career with the City of Detroit Waste Water Treatment Plant that spanned 34 years, retiring in 2022.  Mike loved his work and truly enjoyed laughing, dancing and of course spreading the word of YAH to his co-workers.    Mike was very loving, kind, and had a great compassion for his special friend and companion Evette Cook, his family and his friends. Mike adored his beautiful daughters and always wanted the best for them.  Mike always searched for wisdom and understanding to find the answers that his mind and soul were looking for.      It was in the year 1974 that he discovered a truth that he had not heard before, which was that the Creator of the Heaven and Earth's true name is YAHVAH and the Savior of the World's name is YAHSHA. Mike accepted Yahvah and Yahsha Hamashiyah as his personal Savior and united himself to the Assembly of Yah.  Mike's passion was to engage in spiritual conversations and pursuing hidden truths of the Bible as well as various other books. Mike has spoken on various social media outlets including YouTube Channel Nature All Ways. Mike dedicated his life and gave his heart and soul to Yah and joyously discovered and spread the fantastic truth of our true identity of who we are as a people: the Masheyah!    On January 28, 2022 following recent battles of health issues and also his daily commitment and dedication to getting the true name of the creator YAHVAH to the masses, YAHVAH decided that Michael Andre Coles had completed his work here and swiftly called him home.    He was preceded in death by: two brothers Roy Jerome Coles and Leon Coles Sr.    Mike leaves to cherish and rejoice in his memories: his beloved daughters,  Nathanyah and Rakhel (Marcus); two grandchildren, Anaviyah and Jeremiah; only brother, Reginald; five sisters, Felicia, Stilletta, Brenda,Valerie all of Detroit and Annabelle Edwards from Charleston, West Virginia; two aunts and a host of nieces and nephews, cousins and friends.       “Be still, and know that I am YAHVAH.. I will never leave thee.”  I am thy bread; I am thy intelligence; I am thy safety, I am thy security. In that stillness, you have gone beyond words and thoughts to the very center of all beings, and there you can rest. – J.S. Goldsmith

In Loving Memory Of: Michael Andre Coles was born in Detroit, Michigan, on November 13, 1956. Mike was the 7th child born of Roy and Ernestine Coles whom both precedes him in the afterlife.  Educated in the Detroit Public Schools, Mike obtained... View Obituary & Service Information

The family of Mr. Michael Andre Coles created this Life Tributes page to make it easy to share your memories.

In Loving Memory Of:
Michael Andre Coles&#160;was born in Detroit,...

Send flowers to the Coles family.