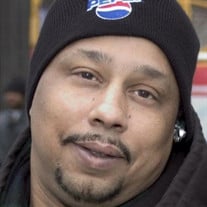 Michael Burton was born in Little Rock, Arkansas on June 30, 1965 to Mary Lee Lewis and Frank Burton. Michael moved to Detroit with his family November 27, 1969. He lived an accomplished and blessed life. In the early years, Michael attended Thomas M. Cooley High School (Detroit, MI) where he was very active in baseball and held a position on the swim team. After graduation in 1983, Michael did some associate work at Lewis Business College but later found the office was no place for him. He had a passion of working with his hands and successfully performed jobs working in electrical wiring and commercial and residential fencing. Upon tiring of working outdoors in Michigan’s cold climate, Michael in 2005, studied to acquire a Commercial Drivers’ License with a Hazmat Endorsement and became a Professional Driver. Michael’s driving career would take him across the country to Ohio, Vermont, New York, Florida, Minnesota, Alabama, Texas, New Mexico, and California driving and teaching regionally for Werner Enterprises. Later, he moved on to J.B. Hunt and Pjax. In 2009, Michael decided to drive locally and in 2011, joined the USF Holland Family and the International Brotherhood of Teamsters. Michael has secured several certifications and recognition awards for performance. One of his proudest accomplishments was his advanced position as a Safety Trainer. He was always eager to help newer drivers achieve higher goals. Michael’s first marriage to Yolanda Scott in 1986 led to four children, Jerome Scott (step-son), Phillip Edward Scott (deceased 2001), Michelle Burton, and Brittney Burton. Gail and Michael met in 1990. They did everything together. They were inseparable. On July 26, 2002, after 10 years of asking, Michael joined in holy matrimony with the “Love of his life” Gail Pryor and accepted his new step-daughter, Brandy N. Herriotte, as his own. Michael’s favorite pastimes included traveling, sports games, barbequing, and picnicking with his coworkers. He loved to fry his delicious humongous shrimp and Walleye with his brother-in-law, Bernard Pryor, on Fridays and they would feed everyone they could find. Michael loved Chinese food, hard action movies, Saturday cartoons, and potato chips. He always wanted to travel into Space. Michael even loved politics. He would accompany his wife, Gail, to the symphonies in Downtown Detroit. And, he loved The Tempting Temptations. Michael was so personable and kind that anyone could come to him for help and advice. He loved to laugh and always made sure everyone was having a good time! God called Michael home on Tuesday, September 7, 2021. He was preceded in death by his brother Frank Jackson (2013) and his son, Phillip Edward Scott (2001). He leaves to cherish his memories: wife, Gail Burton; mother and step-father, Mary and Isaiah Adams; three sisters, Diann Boyd, Claretta Burns (Elijah), April Adams; two daughters, Michelle Ashley Burton and Brittney Nicole Burton; one step-son, Jerome Scott; one step-daughter, Brandy N. Herriotte (Lucius); and a host of nieces, nephews, grandchildren, cousins, and friends.

Michael Burton was born in Little Rock, Arkansas on June 30, 1965 to Mary Lee Lewis and Frank Burton. Michael moved to Detroit with his family November 27, 1969. He lived an accomplished and blessed life. In the early years, Michael attended... View Obituary & Service Information

The family of Mr. Michael Burton created this Life Tributes page to make it easy to share your memories.

Michael Burton was born in Little Rock, Arkansas on June 30,...

Send flowers to the Burton family.