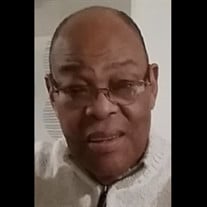 In Loving Memory Of: Today we celebrate the life and home going of Micah Lee Smith, a husband, father, grandfather, big brother, and friend.  Micah was born on November 12, 1943, in Elberton, Georgia, to the late Lee Micah Smith and Cornelia Smith.  Micah was the eldest male of five children.  His older sister Edna L. Palms preceded him in death. Micah was educated in the Detroit Public School system and graduated from Eastern High School.  Micah had a beautiful singing voice and was pursuing a singing career when he was drafted into the United States Army.  He served in Vietnam as a Military Police Officer obtaining the rank of sergeant until his honorable discharge from the service. Upon returning home, he joined the Detroit Police Department where he served with honor and distinction.  Micah reached the rank of Inspector prior to his retirement in 2003.  During his career at the police department, Micah pursued higher education, receiving a Bachelor's degree at Madonna University and his Master's from Eastern Michigan University. He also received a host of accolades and commendations during his tenure.  Other notable achievements include a U.S. Department of Justice COBRA, WMD Responder certification, as well as a School of Police Staff and Command certification from the Traffic Institute at Northwestern University. When Micah returned from Vietnam he met the love of his life, Vallorie Cynthia Parks, who preceded him in death.  Together they have three children, Jesse, William, and Michelle. Micah was raised in a Christian home, was baptized at an early age and accepted Jesus Christ as his Lord and Savior.  He kept his Bible at hand, as he read it daily, and you would often hear him quoting scriptures during conversations with friends and family members.   Micah departed life on January 14, 2022, to be home with our Lord and Savior.  He leaves to cherish in his memory his children, Jesse (Belinda), William (Lesley) and Michelle (David); his siblings, Sarah Pickens, Joseph Edward Smith (Bettie) and Rev. Dr. Willie F. Smith (Dianne); seven grandchildren, three great-grandchildren and a host of loving relatives and friends.

In Loving Memory Of: Today we celebrate the life and home going of Micah Lee Smith, a husband, father, grandfather, big brother, and friend.  Micah was born on November 12, 1943, in Elberton, Georgia, to the late Lee Micah Smith and Cornelia... View Obituary & Service Information

The family of Mr. Micah Lee Smith created this Life Tributes page to make it easy to share your memories.

In Loving Memory Of:
Today we celebrate&#160;the life and home going...