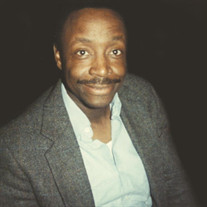 In Loving Memory Of: Melvin Spencer was born on January 9, 1945, in Detroit, Michigan to Julius Merrill and Mamie Kaigler-Spencer. His mother preceded him in death as a young child. As a result, he was blessed to have been reared by his dedicated, widowed father, in conjunction with the loving support of his paternal grandparents, Robert and Bessie Porter. Melvin accepted Christ at an early age. While a mother's love and presence are truly irreplaceable, Melvin's childhood was deeply supported and enriched not only because of his father's and grandparents' committed caregiving, but also due to the strong bond he shared with his elder siblings: Jeanette, Vernice, and Deloris, younger brother Raymond, and two "sibling­cousins," Jerome II and Patricia. Melvin was a student of the Detroit Public School system, graduating from Detroit Central High School in January 1963. Upon graduation, he relocated to the South to pursue a career as a general craftsman, ultimately joining the United States Air Force. He was stationed at Lackland AFB in San Antonio, TX. Melvin's enlistment with the USAF afforded him the opportunity to not only serve his country, but, equally to learn specialized skills, which helped him serve his fellow comrades requiring medical attention within the base's infirmary. Most noteworthy of his active-duty years at Lackland AFB, Melvin married the bride of his youth. They were blessed with two amazing and incredibly smart children, Sean and Laurel. Upon his honorable discharge from the USAF, Melvin and his young family moved back to his hometown of Detroit, Michigan. Initially, his post-military employment began with General Motors Corporation. However, Melvin would soon transition and secure a "coveted" career opportunity for the 1970s: the position as a United States Postal Service Letter Carrier. Melvin enjoyed a very rewarding 35-year career with USPS until his retirement in January 2000. During his tenure as a dedicated USPS field employee, "seasons changed" as God's Word says will perpetually happen as long as the earth remains. And thus, Melvin proved to be just as dedicated in his home life as a single father demonstrating tremendous depth, character, and strength. Not only would the fall, winter, and spring of life produce the rain, sleet, and snow he was accustomed to "weathering" as a mailman, summer would soon return and the sun did shine, again, in Melvin's life. He was united in holy matrimony with a gorgeous, energetic, and effervescent USPS colleague, Ms. Shevaughn Adams. The Spencer family grew to now include a "bonus daughter," Talicia, whom he enthusiastically loved and accepted as his own, and soon thereafter, Melvin and Shevaughn's beautiful baby daughter, Karin, affectionately known as "KiKi," was born. In his leisure time, Melvin enjoyed playing cards and softball, as well as watching NBA and NFL games on TV. Moreover, he loved to watch classic "black and white" movies, and was an avid reader of vintage war novels. Most of all, Melvin enjoyed vacationing with his family on the "sun-covered" beaches of the world, traveling to destinations with beautiful hotels, coupled with vast gaming and entertainment. Melvin departed this life on Sunday, October 24, 2021. Beloved family members, who additionally preceded him in death, were his loving father Julius and grandparents "Daddy Bob" and "Mama BP," as well as adored siblings "Ray-Ray," Vernice, "'Lo," and "brother-cousin Romie." He leaves to cherish with everlasting memories of his life, love, and legacy, his wife of 27-years: Shevaughn; children: Sean (Linda) Spencer of Duluth, GA, Laurel Dalton of Palm Beach Gardens, FL, Talicia Adams of Redford, MI, and Karin Spencer of Farmington Hills, MI; Family Matriarch/Eldest Sibling: Jeanette McLemore of Hanover, MD, and "Sister-Cousin" Patricia of Royal Oak, MI; grandchildren: Trinity, Josh, Talayah 'aka' "Lele," and Lavar; "In-Loves": Ronald (Shamenia) Adams of Detroit, MI, and Constance (Kenneth) Marks of Lansing, MI; "BFFL-Brother" Anthony (Debra) Montgomery of Southfield, MI; and close friends Carolyn Hill, along with Robert (Sharon) Preston of Detroit, MI; and a host of nieces/grand­nieces, nephews/grandnephews, other relatives, friends, and a renowned postal brother-sisterhood. Per the Family Mask are required during the Viewing and the Funeral Service.

In Loving Memory Of: Melvin Spencer was born on January 9, 1945, in Detroit, Michigan to Julius Merrill and Mamie Kaigler-Spencer. His mother preceded him in death as a young child. As a result, he was blessed to have been reared by his dedicated,... View Obituary & Service Information

The family of Mr. Melvin Spencer created this Life Tributes page to make it easy to share your memories.

Send flowers to the Spencer family.