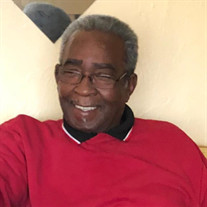 In Loving Memory Of When we were born into this world we are oblivious to everything except our essential needs, food and care. It is at this time our journey through this world begins. No one knows for sure how long their journey will last. As the years pass we go through life’s stages. We pass through childhood into adulthood and record our time spent here each year. Today we celebrate the journey of life for Melvin Lewis McLin, affectionately known as Bubba Lewis, Mel, Papa and often greeted with a friendly “Hey Old Man.” He was the fifth of seven children born to the late Rev. John L. McLin and Hauty E. Wells on December 7, 1939 in Dellrose, Tennessee. Melvin left Tennessee at an early age and moved to Smith Creek, Michigan before settling in Detroit. He entered the military in 1963, and as a sharpshooter in the Army he shared experiences and forged friendships that would last a lifetime. While in Detroit he began working for Ford Motor Co., from which he retired after 30 years of hard work and dedication. His time at Ford provided him with many, many more lifelong friends. Melvin’s work ethic didn’t end at retirement. He turned to tending to his well- manicured lawn and helping the neighbors with theirs as well. If he could not be found in his self-made man cave, he was probably planting flowers, gardening, or repairing something. His granddaughter said, “If Papa can't fix it, it can't be fixed.” He loved entertaining company, bowling, playing cards, and throwing some Q on the grill. He was known as the master BBQ chef, just ask his son. Melvin also had a wonderful singing voice. He was part of a singing group know as the Embracers, and sang bass in his family gospel group The Traveling Stars. He even sang doo-wop with a group that came to be known as the Spinners. Melvin loved life and lived it on his terms. He made his transition to be with the Lord on Wednesday March 23, 2022. His siblings Leo Sherrell, Rocell Sherrell, and Martha Terry preceded him in death, but now he is with them in his own sweet rest. He leaves to cherish his memory: his loving wife, Joyce L. McLin of 37 years; son, Kenneth McLin; stepdaughter, Donna Ford; granddaughter, Alexa Madison, and three sisters, Edith Jackson (Las Vegas, NV), Louise Kitchen (Detroit, MI), Marie Whitson (Long Beach, CA); along with a host of nieces, nephews, cousins and friends.

In Loving Memory Of When we were born into this world we are oblivious to everything except our essential needs, food and care. It is at this time our journey through this world begins. No one knows for sure how long their journey will last.... View Obituary & Service Information

The family of Mr. Melvin Lewis Mclin created this Life Tributes page to make it easy to share your memories.

In Loving Memory Of
When we were born into this world we are...

Send flowers to the Mclin family.