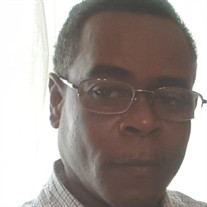 In Loving Memory Of: Lynwood Stovall was born on March 26, 1964, as a twin (Lynette) who came into this world just two minutes before him to Joyce Stovall. He joined First Baptist Institutional Church as a very young child and was baptized in the late 70s. Lynwood attended schools in the Detroit Public School System. He was a Safety in middle school and took his responsibility at his posts very seriously. Lynwood graduated from Henry Ford High School and was very popular in and out of school. He had a lot of friends, and up to the day he departed this life, still maintained real friendships with a great deal of those that he grew up with from the neighborhood on Avon. That neighborhood was extremely instrumental in our upbringing. After graduation from high school, Lynwood took classes in construction. Lynwood was under the apprenticeship of Willie Chastang which established a long-term friendship. He became excellent at his craft as a Cement Masonry. Working in construction was something he loved to do. If you wanted it done right, he was your man, but if you wanted to cut corners, he was not. Doing it right was the only option. He took great pride in his work. Lynwood was well-respected by his employers and co-workers. He had over 30 years of experience perfecting his skills in his field. Lynwood was a man of integrity and great honor. He was very proud of being a devoted husband and taking care of his wife. He was also a wonderful son, father, brother, and friend. He loved jazz and house music and he loved to cook and share his delicious meals with his friends and family. Lynwood had a wonderful sense of humor and never met a dog he didn’t like. Lynwood leaves to cherish his wonderful memory: wife, Carolyn of 13 years; son, Christopher; son, Mike (Safarie); precious grandbaby, Morgan and great-nephew, Nasir; mother, Joyce; three sisters, Lynette Richardson (Allen), Sandra Russell (Bill) and Karen Trimble (Harvey); two aunts Karen Evans and Elaine Ramsey; two nieces, Domonique and Lyndsay; three nephews, David, William IV, and Ethan. There are many cousins and friends that will miss him dearly. Lynwood’s three brothers-in-law, Felix, Maurice and Harold treated him like a brother, and he considered them his brothers. He loved his extended family with his wife and shared a special bond with his mother-in-law, Rebecca Guy who preceded him in death. His grandmother, Wilma Evans who preceded him in death helped to raise him.

In Loving Memory Of: Lynwood Stovall was born on March 26, 1964, as a twin (Lynette) who came into this world just two minutes before him to Joyce Stovall. He joined First Baptist Institutional Church as a very young child and was baptized... View Obituary & Service Information

The family of Mr. Lynwood Stovall created this Life Tributes page to make it easy to share your memories.

Send flowers to the Stovall family.