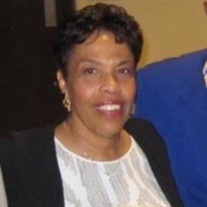 In Loving Memory Of Lynn Carole Baker Barrett was born on January 11, 1944, in Detroit, Michigan to the union of Gretchen Richardson and Howard Baker. She was the eldest of three siblings born to this union and the only daughter. Throughout... View Obituary & Service Information

The family of Mrs. Lynn Carole Barrett created this Life Tributes page to make it easy to share your memories.

In Loving Memory Of
Lynn Carole Baker Barrett was born on January...

Send flowers to the Barrett family.