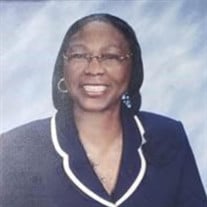 In Loving Memory Of: The Lord had a plan and purpose for Lula Jean Lewis, as she boldly entered this world on that glorious Friday, April 21, 1944. Lula was born into the loving union of Henry and Pinky (Sams) Lewis, in the small farming community... View Obituary & Service Information

The family of MS. Lula Jean Sears created this Life Tributes page to make it easy to share your memories.

The Lord had a plan and purpose for Lula...

Send flowers to the Sears family.