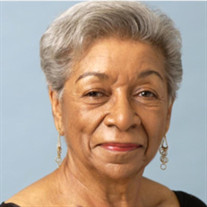 In Loving Memory Of: Carita Ingram Sledge was born on June 19, 1927 in Macon, Georgia, the youngest of seven children of Charles D. Ingram, Sr. and Willie Barnes Pruden.  She experienced some of her happiest memories when she attended the American Missionary Association (AMA) high school; a high school founded by a Protestant abolitionist group with the same name. Their focuses were on the abolition of slavery, education for African Americans, gaining racial equality, and promoting Christian values. The teachings from this school heavily influenced Carita’s professional and personal life. Carita was a third generation Presbyterian, growing up in the historical Washington Avenue Presbyterian Church, Macon, GA. Upon graduation from high school, Carita attended Talladega College and earned her bachelor’s degree from Fort Valley State College.  She joined the Sisterhood of Alpha Kappa Alpha Sorority Chapter at Talladega College and continued her service in the Epsilon Omega Omega Chapter in Macon, GA. She remained a devoted and active alumnus at Talladega College for most of her life.  Carita met and married Ulysses S. Burdell Jr. and they had two children, Ulysses S. Burdell III, and Waverlyn W. Burdell.  Later she married Rudolph Sledge and moved to Detroit, MI. A lifelong public servant with a passion for helping others, Carita enjoyed a career in the non-profit sector that spanned over 60 years.  Carita is remembered as a trailblazer in the community and a consummate advocate for those without a voice.  For 20 years, she worked at the Neighborhood Service Organization in various leadership capacities.  For the last ten years of her work, she served as the Executive Director.  In retirement, she remained devoted to the agency and was always available to leaders that sought her guidance. She is also remembered for her tenacity, competitiveness, drive and high energy; she wielded these assets and produced programmatic and financial growth in the organizations she directed.  Carita was visionary, driven for solutions who believed that all problems could be resolved or managed. To that magnitude, the NSO staff for her 20 years of service gave her a desk plaque engraved, “Just Do It,” prior to Nike’s branding.  She was also known for her timeless daring style; her stylish stilettos, leather skirts, and fine jewelry. Carita actively demonstrated her belief in service and giving. She worked on numerous political campaigns and served on many boards, notably Michigan Cancer Society, Michigan Veterans Foundation, Urban Neighborhood Initiatives, Chateaufort Place Cooperative, Talladega College Alumni Association and as a Deacon at Westminster Church of Detroit. Family was her passion and delight. She loved to host parties and attend family events. Her Sunday and holiday dinners were legendary.  The homemade chocolate rum cakes she made served with Haagen-Dazs Rum Raisin ice-cream were a historical family favorite. Ever the avid global traveler, she visited several continents and especially enjoyed her time in Egypt, Morocco, France, Bermuda, London, and Rome. She is survived by her children Ulysses S. Burdell, III (Jacqueline), and Waverlyn W. Burdell; her granddaughters, Kimberlyn N. and Kelly L. Burdell and grandson, Charles L. Burdell-Williams (Quenisha), great-granddaughter Cailyn T. Williams and great-grandsons Quentin C. Williams and Kamdyn U. Burdell-Hewitt, as well as many loving nieces, nephews and cousins. She was preceded in death by her parents, Charles D. Ingram, Sr. and Willie Barnes Pruden; her siblings, Leon, Charles D. Ingram (Alice), Herman Ingram (Ethel), Thomas Ingram (Petronella), Thelma, Harold B. Ingram (Alice) and Brother and Sister-in-law, Lee A. and Ina Archer. Please no floral arrangements per family, in place of flowers please make all donations to the Food Program at Westminster Church of Detroit.

In Loving Memory Of: Carita Ingram Sledge was born on June 19, 1927 in Macon, Georgia, the youngest of seven children of Charles D. Ingram, Sr. and Willie Barnes Pruden.  She experienced some of her happiest memories when she attended the American... View Obituary & Service Information

The family of Mrs. Lottie Carita Ingram Sledge created this Life Tributes page to make it easy to share your memories.

In Loving Memory Of:
Carita Ingram Sledge was born on June 19,...

Send flowers to the Sledge family.