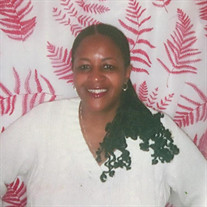 In Loving Memory Of: On July 28, 1959, Lisa Talbert was born to the union of Alzonia and Julius Talbert, Sr. in Grenada, Mississippi. After the passing of both her parents, she and her older sister, Kathleen, were raised by their aunt, Jennie Jones, who also preceded her in death. After moving to Michigan in 1961, Lisa was baptized in 1965 at Mount Valley Baptist Church. In the early 70s, Lisa began attending Morning View Baptist Church and remained a member until the day she passed. It was here that she solidified her relationship with God and learned to become the spiritual woman she was. Her favorite scripture was Jeremiah 29:11: “For I know the thoughts that I have of you...thoughts of peace, and not of evil, to give you an expected end.” It was this verse that led her to rededicate her life to the Lord in 2006. She began attending Kennedy Elementary School and went on to graduate from Cody High School in 1977. Shortly thereafter, she gave birth to a beautiful baby girl, Diamond, in 1980, and a handsome baby boy, Denzel, in 1993. Lisa began working in the foodservice industry at Logan Elementary School in 1984. Throughout the years, she serviced numerous schools, and encountered many kids who knew her as “nana,” “granny Lisa,” or “Ms. T.” She took on the role of the loving lunch lady and was committed to brightening up the lives of any kid she served. She took this role so seriously that she even dressed up as the snowman for the kids for Christmas and bought birthday gifts for children whenever she could. When serving students, she would offer encouragement that was so instrumental in their lives that they would often write her notes thanking her for pushing them to go on and do great things, and, with her words of inspiration, they did. She continued in this line of work for over 20 years and made sure no kids left her cafeteria hungry until the day she passed. During her free time, she loved watching her recorded shows and eating sunflower seeds and chips. When she wasn’t relaxing at home, she would be playing bingo and cards with her friends, taking them on a run for their money, and then going to the casino with the winnings. She may not have had much luck at the casino, but it didn’t deter her from chasing the thrill of pulling the lever on the slot machine. As much as she loved spending time with her friends, she enjoyed spending time with her grandchildren even more. She was hands-on in her children and grandchildren’s lives and played a significant role in giving them the foundation they needed to succeed. Due to unexpected health complications, Lisa departed this world on Tuesday, November 23, 2021. She was preceded in death by her older brother, Julius Talbert, Jr. and her younger brother, Timothy Talbert. She leaves to cherish her life her older sister, Kathleen; son, Denzel; daughter, Diamond (Drew, Sr, who preceded her in death); grandchildren, Jasmine, Drew, Jr., and Jeremiah; nephew, Julius III (Tarea); nieces, Kisha, Kandace, and Krystal (Jasahn); and great-nieces, Teresha, Erika, Karis, Kady, and Klir. She also leaves to cherish her life her spiritual daughter, Shlinda Hardrick-Kelly (Antonio, Sr.), and spiritual grandchildren, Jaraile and Antonio, Jr.

In Loving Memory Of: On July 28, 1959, Lisa Talbert was born to the union of Alzonia and Julius Talbert, Sr. in Grenada, Mississippi. After the passing of both her parents, she and her older sister, Kathleen, were raised by their aunt, Jennie... View Obituary & Service Information

The family of Ms. Lisa Talbert created this Life Tributes page to make it easy to share your memories.

Send flowers to the Talbert family.