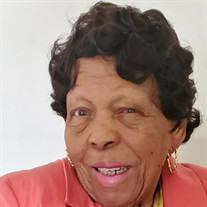 In Remembrance Of Our Beloved Lillian Marjorie Solomon A woman of beauty, A woman of grace Beholding God’s face She walks with the Lord With Integrity Knowing her purpose, And destiny No matter what happens She walks in God’s love Reflecting the beauty Of her Father above Lillian Marjorie Solomon a.k.a. “Lill”, made her transition from this earthly place to her heavenly home peacefully on June 18, 2021, in Southfield, MI. She was the youngest and last of ten children, and the apple of her parent’s eye, born to the union of Sidney and Lillie Edwards in August 1929, in Romeo, MI. Lillian began her walk with Christ at a very early age baptized at Second Baptist Church in Romeo, MI. where her father was a Deacon who helped build the church. She was reared in the church singing in the choir and most often times participating in all of the church programs alongside her family. She truly believed in honoring her parents and always described such a wonderful example of a strong complete family unit she frequently reflected on and emulated throughout her life. Lillian was a stellar student graduating from Romeo High School with honors. While in high school she was a gifted athlete in women’s basketball as a point guard and in the glee club. After high school, Lillian began pursuing her degree in Liberal Arts at Wayne State University. Lillian was married to her late ex-husband Ernest Solomon Jr. and was blessed to have six children. She was a devoted young wife and dedicated mother when beginning her career in retail management after moving to San Francisco, Calif. with her family for approximately five years. She enjoyed lots of social events with friends and was a member of the Women’s International Bowling Congress and the City and State Association. Lillian later returned to Detroit, MI. where she continued growing her family. Education was a priority she instilled in her family, so much so, that she worked at the same school her last three children attended. She furthered her career in what suited her servant heart. Lillian later retired from the City of Detroit Board of Education as a Coordinator of Community Affairs. She received several awards in recognition for her hard work at Area A. In her leisure, Lillian really enjoyed volunteering at the Fox Theater, Detroit Opera House, Fisher Theater, Detroit Music Hall and Masonic Temple as an usher for numerous concerts and plays throughout the years. She also volunteered at the polls yearly during election times and assisted with voter registration drives. O’ how, she enjoyed singing in the choir. She was a previous member of Little Rock Missionary Baptist Church’s choir for many years before becoming a long standing member of Unity Baptist Church senior choir for the past 36 years. Lillian also enjoyed crafting, word puzzles, making sure her children received the best Christmas celebrations ever, playing board games, attending amusement parks every summer, listening to gospel music, relaxing while eating fine chocolates and surrounding herself with regal aura and generosity with others. Attending church became her only interest in the last few years of her life. Lillian never stopped praising God for his grace and mercy for her 91 years of blessings. Lillian was a true believer of the old school philosophy, a no-nonsense disciplinarian, using the one look was all it took model with her children and rooted in the Christian doctrine. She will be remembered for being God fearing, strong, solid, disciplined and trustworthy. It was second nature for her to approach friends, family and especially strangers and provide a compliment or two. She was elated to see their response, hoping it would brighten that exact moment in their lives. She was a confident woman, ambitious, energetic and resourceful. Lillian simply loved life. Those remaining to cherish precious memories of the life and times of Lillian Marjorie Solomon; include but not limited to: Son, Eric Solomon; Daughter, Christie Careathers; Daughter, Dona Solomon; Daughter, Toni Cureton (Tyrone); Daughter, Gina Moore; Son, Ernest Solomon; a host of grandchildren and great grandchildren; nieces, nephews, other family members, and countless dear friends.

In Remembrance Of Our Beloved Lillian Marjorie Solomon A woman of beauty, A woman of grace Beholding God&#8217;s face She walks with the Lord With Integrity Knowing her purpose, And destiny No matter what happens She walks in God&#8217;s love Reflecting... View Obituary & Service Information

The family of Ms. Lillian Marjorie Solomon created this Life Tributes page to make it easy to share your memories.

In Remembrance Of Our Beloved
Lillian Marjorie Solomon
A woman...

Send flowers to the Solomon family.