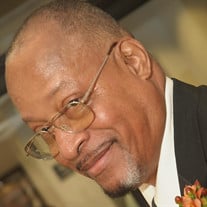 Leroy Etheridge, born July 16, 1944, on a train (yes, a train) coming from New York, NY to Columbia, SC to the late George Etheridge and Sarah (Goodwin) Etheridge, Leroy was the youngest child born to this union. Leroy went home to be with the Lord on April 3, 2022. Sister Ertha Lee Hampton, and wife Yolanda (Emerson) Etheridge proceeded him in death. Leroy loved the Lord and was raised in a loving Christian home. He was rededicated and Baptized at United Christian Church Disciples of Christ – Detroit, MI in 1980. Educated in the Richmond County School District, Leory excelled in culinary arts. He worked in many different fields throughout his life, such as, warehouse, foundry, hospital food services at Sinai Hospital, Michigan Osteopathic Hospital, Director of food services at the Detroit Rescue Mission, Maintenance Engineer at Henry Ford Hospital, Lawrence Tech University, and even Steve’s Soul Food. He was the founder of what may have been Detroit’s first food truck fashioned from a converted school bus. Etheridge floor care service, Etheridge photography, Etheridge Videography, Etheridge Catering, and he even sold refurbished computers as some of his many business endeavors. If there was a dollar to be made Leroy would find it. Leroy also had a heart for Mission. He would do weekly food distributions via Focus: HOPE, and Kroger's to those in need. Unbeknownst to many Leroy became ordained as a Minister through the Universal Life Church with the hope of starting his own food-based mission. Leroy loved deeply. To his first marriage to Ophelia Edmonds were born Donavia Etheridge, and Bridget Petty. His second marriage was to Yolanda Emerson. To this union were born Elliott and Robert Etheridge. His third marriage to Brenda Wilson of which they recently celebrated 41 years produced George and Isaac Etheridge. He was a good provider, loving father, and loyal friend. He leaves to celebrate his life his wife Reverend Brenda Etheridge, sons Donavia – South Carolina, Elliott (Laverne) - Texas, Robert (Sonya) - Onterio, Canada, George (Samara) - Michigan, and Isaac (Sydney) - Michigan, one daughter Bridget-Petty – South Carolina, two brothers William “Jimmy” Etheridge and Charles Etheridge – South Carolina, grand children Darnique, Harold, Elliott, Jr., Ashley, Anthony, Yolanda, Paul, Shanadia, Gabriel, Robyn, Remii-Yolanda, and Jacob, six great-grandchildren, and a host of nieces, nephews, in-laws, members of Unity Christian Church (where he served as First Gentleman for the past 12 years), members of United Christian Churches Disciples of Christ, and special friends, Penny Bailey, Barbara Goode, Mattie Allen, and Edward Rucker.

Leroy Etheridge, born July 16, 1944, on a train (yes, a train) coming from New York, NY to Columbia, SC to the late George Etheridge and Sarah (Goodwin) Etheridge, Leroy was the youngest child born to this union. Leroy went home to be with the... View Obituary & Service Information

In lieu of flowers, the family is asking that you make a donation in the name of Leroy Etheridge to the Michigan Parkison Foundation.

Send flowers to the Etheridge family.