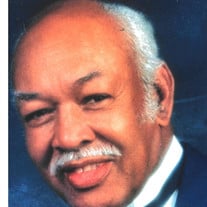 In Loving Memory Of: Leon Martin was born in Jenkinsville, South Carolina, on November 7, 1924, to the late Leroy and Nellie Ray Holmes Martin; he was the oldest of eleven children.  In 1928, the Martin family relocated to Detroit, Michigan, where Leon grew from a small child to an honorable man, where he built his life.  Leon was educated in the Detroit Public Schools system, and at the age of 18, he joined the Coast Guard, where he served in the Mediterranean, North Atlantic, and Pacific areas of war.  After an honorable discharge, Leon enrolled in trade school, where he became certified as an engineer in heating and cooling systems. Leon worked at the City of Detroit Receiving Hospital until he retired in 1982. During his time at the City of Detroit Receiving Hospital, Leon earned many awards and acknowledgments. Leon was the father of three children, Celestine (Pat) Farrican, Linda Martin, and Wesley Martin, who have all preceded him in death. Leon had four grandchildren, Kenneth (Chip) Glenn, Lesley Glenn (who preceded him in death), Frederick Riley, and Leon W. Martin. Leon joined the Episcopal Church in the early 1950s.  In 1979, Leon married Merlyn Martin where they created an extraordinary life together. Leon and Merlyn often traveled throughout the United States and Canada in their motor-home. They toured with members of the Roll-N-Wheels, where he was the president for ten years, and with the Michigan Knights, where he was the Vice-President for four years, both under the Family Motor Coach Association. In the winter months, they shut down their motor-home and went cruising throughout the Caribbean area.  Leon was a man who thrived on family and friends; he was active with Boy Scouts of America, he loved fishing and boating.  Leon played an instrumental role in providing family history to those who came after him. During his life would frequent the Martin Family Reunions and was an active member of the Michigan Chapter.  Leon leaves to cherish his memory: his wife, Merlyn Martin; two stepsons (Terry and Vaughn Smith); three grandsons, Kenneth Glenn, Frederick Riley, and Leon W. Martin;  three sisters (Alma Martin-Walker, Joyce Martin-Allay, and Shirley Ann Martin); one sister-in-love (Elizabeth Martin); great-grandchildren, great-great-children, and host of nephews, nieces, cousins, and friends.

In Loving Memory Of: Leon Martin was born in Jenkinsville, South Carolina, on November 7, 1924, to the late Leroy and Nellie Ray Holmes Martin; he was the oldest of eleven children.  In 1928, the Martin family relocated to Detroit, Michigan,... View Obituary & Service Information

The family of Mr. Leon Martin created this Life Tributes page to make it easy to share your memories.

In Loving Memory Of:
Leon Martin was born in Jenkinsville, South...

Send flowers to the Martin family.