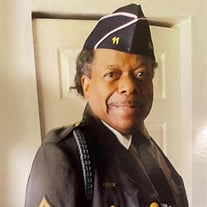 In Loving Memory Of: Lee Denson Harris made his advent into this world on September 15, 1936, in Boston, Massachusetts. He was born to the parentage of Mr. Henry Harris and Fannie Jackson-Harris. Lee was educated in the Sevenday Adventist School as well as the Boston Public School System. Lee proudly served his country, he served in the military branch of the US Army. After moving to Columbus, Ohio to join his sister Sallie, he worked for the city of Columbus as a truck driver. Lee later moved to Detroit. Taking pride in what he believed in, he was apart of our great history serving as a bus driver, during the 1960’s Detroit riots, risking his job for the safety of others. Lee instituted and operated Lee’s Trucking in 1975. Lee was very proud when he became the first black minority licensed motor carrier, working with major companies such as Chrysler and Ford Motor Co. just to name a few. Lee's most valued asset was sharing his wisdom and encouragement with everyone he came in contact with. His favorite past times were watching wrestling, riding his motor cycles, traveling with his family in his motor home (honey) and skating (he was the best skater). On Monday, November 15, 2021, Lee departed this life after a brief illness in Detroit, Michigan. Lee was preceded in death by two brothers, sister Sallie (Henry) and daughter Pamela. He will be truly missed by his wife of fifty-seven years, R. Virginia Harris; daughters, Rosalee (Derrick), Elizabeth (James), Tera, additional daughters, Dierdra, Carmina (Robert), Marcia (Derek) and a forever loving daughter Jeneen and family, twelve grandchildren, Jamie and Derrick Jr. which whom he shared a special bond, a special cousin April, one niece and three nephews, great-grandchildren, great-nieces and nephews, special friends Kim, Paul, and Robert, and a host of family and friends.

In Loving Memory Of: Lee Denson Harris made his advent into this world on September 15, 1936, in Boston, Massachusetts. He was born to the parentage of Mr. Henry Harris and Fannie Jackson-Harris. Lee was educated in the Sevenday Adventist School... View Obituary & Service Information

The family of Mr. Lee Denson Harris created this Life Tributes page to make it easy to share your memories.

In Loving Memory Of:
Lee Denson Harris made his advent into this...

Send flowers to the Harris family.