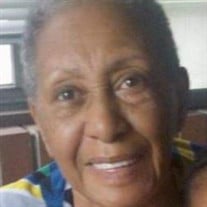 In Loving Memory Of Katie Lee Battle was born October 4,1937 in Nash County, NC to the late Lonnie Battle and Emma Eula Alston-Battle. She was the firstborn of seven children. Katie attended Nash High School in NC. She accepted Christ at an... View Obituary & Service Information

The family of Mrs Katie Lee Lewis created this Life Tributes page to make it easy to share your memories.

Send flowers to the Lewis family.