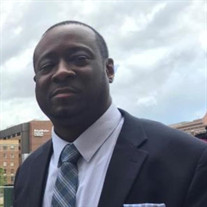 In Loving Memory Of Kareem Jamarr Pringle was born on August 16, 1977 in Detroit, Michigan to Sherri Moore and Kevin McCoy. Kareem accepted Christ at an early age in Detroit, Michigan. He attended the Detroit Public School System where he excelled in all areas of study. Kareem graduated with honors from Osborne High School and was very fluent in French. After graduating high school, he attended Wayne State University and studied Forensic Science. Kareem loved all sports. While growing up on the Eastside of Detroit, he enjoyed playing baseball, basketball, and hockey with his friends. He loved watching and attending wrestling events with his fiancé and daughter. Kareem loved his family immensely and anyone that knew him, was aware of this. There wasn’t anything that he wouldn’t do for them. He was always just a phone call away for anyone needing him. Although Kareem could be outspoken, he was the true definition of a gentle giant. To know him was to love him. Kareem was a jokester, when he had a smirk on his face, you knew it was something. Kareem’s deep voice was mesmerizing and would leave people in awe. He was told by many that he should have been a DJ. He lived the part of DJ vicariously through his love for music. He could tell you about any/all genres of music, none were foreign to him. Kareem’s passion for music was also displayed by the hundreds of vinyl albums that he has collected throughout the years. He enjoyed attending music concerts and if no one wanted to go with him, he would go by himself even if it meant traveling to another state. Kareem loved his dog Tonka, which was truly a man’s best friend. He enjoyed cooking, bicycling, bowling, collecting comic books, reading, playing video games, listening to music, traveling, and spending time with his daughter/family. Kareem was employed at Ford Motor Company for over 23 years. He was a very hardworking, dedicated, and compassionate employee that gave his all-in whatever task he was assigned. As a result of his hard work, in 2007, Ford Motor Company selected Kareem to be a part of a special team and sent him to Japan. He often talked about how honored he was to have had that opportunity. He cared for many of his coworkers current and past and would often tell stories about different things that happened. Kareem departed this life on Thursday, March 24, 2022, in Romulus, Michigan. His loving grandparents, Ms. McCoy, Mrs. Pringle, and Mr. Pringle are waiting there with open arms. Heaven has truly gained an angel and his name is Kareem. Kareem leaves to forever cherish his memory: his mother, Sherri Moore; his father, Kevin McCoy; his loving daughter, Kamille Pringle; his fiancé, Denine Edwards; special daughters, Lauren and Symone Mixon; sister, Angelica Davis; aunts, Marge Dean, Fonda Pringle, Brenda McClinton, Clarice McCoy-Ford (Howard), and Karen Underwood (Roydelle); uncle, Robert McClinton (Esther); special cousin/brother, Michael Underwood (Alicia); best friends, Maurice DeVold and Al Hobbs; his Ford Dearborn Stamping Plant Friends; and a host of nieces, nephews, cousins, and friends.

In Loving Memory Of Kareem Jamarr Pringle was born on August 16, 1977 in Detroit, Michigan to Sherri Moore and Kevin McCoy. Kareem accepted Christ at an early age in Detroit, Michigan. He attended the Detroit Public School System where he excelled... View Obituary & Service Information

The family of Mr. Kareem Jamarr Pringle created this Life Tributes page to make it easy to share your memories.

In Loving Memory Of
Kareem Jamarr Pringle was born on August...

Send flowers to the Pringle family.