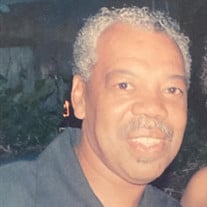 In Loving Memory Of Julius Arthur Welch was born on June 29, 1949 in Talledega, Alabama to the late James Jewel and Annie Laura Welch. Julius had one brother Larry (Harriett) whom preceded him in death. Julius was baptized in the Coosa River at a very early age. He attended the family church St. Campbell Baptist Church in Alpine, Alabama. Julius attended Westside High School in Alabama in which he played drums in the marching band, played many sports but found love in baseball. He continued his education and later graduated. In 1967 Julius moved to Detroit, MI to help his mother with his siblings. Upon arriving to Detroit, Julius started his career at General Motors. He worked many positions then later applied to become a job setter. During his time of employment he fell in love with his Now wife Shirley Borden. They were "inseparable." They both were job setters in which they shared the same shift together, ate lunch together, walked the floors together so when you see JR you see Shirley. Julius and Shirley shared their love and became one and welcomed their son "James Jewel Welch" a great bundle of joy the summer of 1998. Prior to his first marriage he had three children he loved dearly, Chaundra, Anita, and his oldest son Julius Jr. Three children from his present wife Shirley, Martaz, Shirlena, Sharita and bonus daughter Valine that he loved as his own, and a host of grandchildren he also loved dearly. In his earlier years at General Motors he played baseball for Local 235. He then joined a traveling baseball league called "The Detroit Old Times" that later was known as the "Tribe." Julius' nicknames were "Beaver" and "DEUCE #2. He played at the Northwestern Field. If it was a game to play Beaver was there. The team extended him with a great brotherhood and lasting friendships with Mike Carter, Blackburn, Sanchez, Wilkes, Marvin, Twin, Red, Kenny, Donnie just to name a few. The league traveled throughout the United States and Canada. Julius retired after 42 years of service with General Motors bka American Axel. He soon left us to celebrate his life full of memories, pictures and good vibes with his loving brothers, Kenneth and Deorpheus (Mona), and two sisters, Voncell (Anthony), and Charlene and a host of nieces, nephews, uncles, aunts and many friends.

In Loving Memory Of Julius Arthur Welch was born on June 29, 1949 in Talledega, Alabama to the late James Jewel and Annie Laura Welch. Julius had one brother Larry (Harriett) whom preceded him in death. Julius was baptized in the Coosa River... View Obituary & Service Information

The family of Mr. Julius Arthur Welch created this Life Tributes page to make it easy to share your memories.

In Loving Memory Of
Julius Arthur Welch was born on June 29,...

Send flowers to the Welch family.