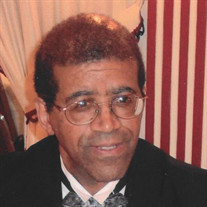 In Loving Memory Of Johnson Gilliam, Jr., 74, of Detroit, MI, exited his Earthly body on February 23, 2022, surrounded by his loving family. He was born on January 26, 1948 to Johnson and Lizzie Gilliam in Union, South Carolina. As a young child, he migrated to Detroit with his parents. After graduating from Southwestern High School in 1966, in Detroit, he went on to serve in the U.S. Army. He also worked as a millwright for Great Lakes Steel, later renamed United States Steel, until retirement. Johnson married the love of his life, Carolyn Theresa Gilliam, on June 9, 1973. Ever the family’s lively and colorful storyteller, he enjoyed sharing how his future wife’s sister was a neighbor of his Uncle William and Aunt Doris Gilliam in Southwest Detroit. At the urging of his aunt to go introduce himself to the neighbor’s visiting single sister down the street, he agreed to return a pot that she had borrowed. Six months following that first Christmas-season meeting, they united in marriage. To that 48-year union, they bore two children, Shekini and Tyrus. He was an avid reader who enjoyed quietly sitting in his yard on warm summer days reading the newspaper. He also loved to travel. Family trips ranged from relaxing, to educational, to adventurous. The highlight of his summers was his nearly annual return to Union, South Carolina for the Second Sunday in August. That’s where he enjoyed being reconnected with family, southern soul food, red dirt, down-home church hymns and foot stomping on the church floors of New Hope AME Zion. Aside from this regular trip, he also never shied away from taking the family on exciting adventures, including tours of caves, helicopter rides, and sand dune climbing. The music during those road trips in the family van was deejayed by Johnson, who made sure his favorites, David Ruffin and the Temptations, were in heavy rotation. Johnson accepted Jesus Christ as his Lord and Savior at a young age and spent his formative years as a member of St. John AME Church, in River Rouge. He then spent the more than 40 remaining years of his life as a member of Hartford Memorial Baptist Church, in Detroit. He was predeceased by his parents, Johnson and Lizzie Gilliam; a sister, Nancy Gilliam; a brother, Charlie Gilliam; mother-in-law, Doskie Belle Hurt; and brothers-in-law, Joseph (Betty) Oden and Leroy Young. He is survived by his wife, Carolyn Theresa Gilliam; two children, Shekini (Darryl) Jennings and Tyrus D’Andres Gilliam; two sisters, Loretta Young and Lenora Meeks; one brother, Maurice (Lynn) Gilliam; a sister-in-law, Sarah Jackson; a brother-in-law, Willie James (Anna) Hurt, and a host of nieces, nephews, cousins, in-laws, and other loved ones.

In Loving Memory Of Johnson Gilliam, Jr., 74, of Detroit, MI, exited his Earthly body on February 23, 2022, surrounded by his loving family. He was born on January 26, 1948 to Johnson and Lizzie Gilliam in Union, South Carolina. As a young... View Obituary & Service Information

The family of Mr. Johnson Gilliam Jr, created this Life Tributes page to make it easy to share your memories.

Send flowers to the Gilliam family.