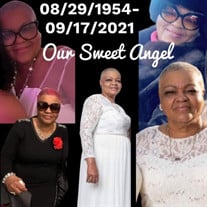 In Loving Memory Of ohnetta Thompson McLoed was born August 29, 1954 in Detroit, Michigan to the late parents Helen and George. Johnetta accepted Christ at an early age. She was educated through the Detroit Public School System, and was a graduate... View Obituary & Service Information

The family of Ms. Johnetta McLeod created this Life Tributes page to make it easy to share your memories.

In Loving Memory Of
ohnetta Thompson McLoed was born August 29,...

Send flowers to the McLeod family.