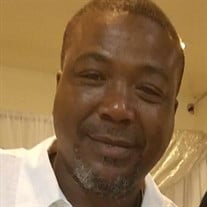 In Loving Memory Of: Mr. Jemare Williams, son of the late Ben Williams Sr. and Lester McKenzie Dortch was born June 25, 1971, in Saint Louis, Missouri. He attended Parkway North Senior High School where he enjoyed participating in theater and landed a role as Tony the Tiger in the school play his senior year, graduating in 1989. Jemare completed a brief stint in the armed forces, returning home to begin his career as an Ironworker in 1994. Jemare’s passion for Ironwork continued until 2009. In 2010, Jemare returned to school enrolling at Rankin Technical College perusing his certification in auto mechanics. For a few years, Jemare worked as a mechanic until moving to Detroit, Michigan where he began his career with Union Pacific Railroad in 2015 then moving to Norfolk Southern Railroad in 2016 until his death. Jemare had a generous spirit and pleasant personality, he was loved by many. He was a loving father, brother and friend. He definitely was a football fanatic – “Go Steelers”. His influence will forever remain in the lives of all who knew him. He departed this life Tuesday, November 2, 2021 at Beaumont Hospital in Troy, Michigan. He was preceded in death by father, Ben Williams Sr., and mother, Lester McKenzie Dortch His life will forever be cherished in the lives of his three sons and one daughter: Ben Williams Jr. (Alexis Felder), from St. Louis, MO, Stephen Walter Williams of St. Louis, MO, Jalen Williams of St. Louis, MO, Kylie Marie Williams of St. Louis, MO; one granddaughter, Graylyn Victoria Ann Williams; his partner: Esha Demmings and her two daughters, Mieyanarie Demmings (Logan and Kannon) and Cardiea Demmings (D’monie); three siblings; sisters, Nancy McKenzie of Detroit, MI and LaRonda McKenzie of Detroit, MI and brother, Ben McKenzie, Jr (Khaliha) of Detroit, MI; the mothers of his children: Kimberly Williams, Monica Blanton and Billie Jean Thurmond; nieces and nephews: Niteai, Micheai, Ben, Tanika Mary Ann, Makayla, Samiya and Isacc; a host of devoted aunts, uncles, cousins and friends.

The family of Mr. Jemare' Williams created this Life Tributes page to make it easy to share your memories.

In Loving Memory Of:
Mr. Jemare Williams, son of the late Ben...

Send flowers to the Williams family.