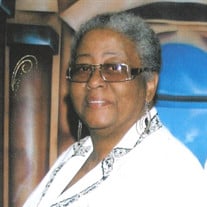 Jearline Speeks was born on January 17, 1954 in Moro, Arkansas to the union of the late Richard (Bo) and late Cornelius (Coot) Walker. She was the oldest child of this union. She was also blessed to have two older sisters, the late Bessie Keeper and the late Lizzi (Liz) Walker and a brother the late, Eddie Walker. She enjoyed being a sister to Barbara, Charles, Johniece, Junior, Sandra and Ervin, all of whom preceded her in death. At an early age, Jearline was adopted by her aunt and uncle, the late Laura and Eddie Foster. Both of whom she loved dearly. Jearline accepted Christ at an early age. During her childhood and youth she was a member of Springfield Missionary Baptist Church in Moro, Arkansas. She severed as the church’s clerk as a young adult. Her love for Christ was everlasting and enduring. She was always inviting others to see God’s goodness. Jearline attended Moro Public Schools and later moved to Detroit, MI with family to seek career opportunities. She was employed with Ford Motor Company as a Quality Control Inspector for several years. She then began the lifelong career of nurturing and pouring love into little ones. She could often be seen with her “new” baby. She loved children and children loved her. On September 1, 1974, she was united in holy matrimony to Rev. Bobby Speeks. They were married for almost 47 glorious years until the Lord called her home. They had the joy of raising Robert. She worked along side of her husband as a faithful servant as he pastored for the past 31 years. She could be seen in the choir stand, leading solos, the kitchen, leading Missionary Service on Wednesday nights, planning fund-raising events for the church or whatever else she was called to do. She loved her church family and fellow sisters and brothers in Christ. She was truly a faithful servant in whom the Lord was well pleased. She now gets to wear her crown. Jearline loved family and attending family events. She never met a stranger. She had an infectious laugh, smile, and could bake a mean pound cake. She will be missed by all and will forever be the “First Lady” of Haven of Rest Missionary Baptist Church. Jearline departed this life on Saturday, August 28th in the comfort of her home. She was preceded in death by parents Richard and Cornelius Walker, Laura and Eddie Foster, siblings Bessie, Liz, Barbara, Charles, Sandra, Johniece, Junior, and Ervin. She leaves to cherish her memories, husband Rev. Bobby Speeks; son Robert (Holly) Speeks; three grandchildren, Jordan, Adonis, and Robert Jr., one great-granddaughter Rudy; siblings, Thomas Walker and Barbara (Walker) Johnson; brothers in-law Skipper (Maxine), Jerry (Verlene); sisters-in-law Lillie Walker- Dickerson (Jessie) Ethel Miller (Eli), and a host of nephews, nieces, cousins and friends.

Jearline Speeks was born on January 17, 1954 in Moro, Arkansas to the union of the late Richard (Bo) and late Cornelius (Coot) Walker. She was the oldest child of this union. She was also blessed to have two older sisters, the late Bessie Keeper... View Obituary & Service Information

The family of Mrs. Jearline `Speeks created this Life Tributes page to make it easy to share your memories.

Send flowers to the `Speeks family.