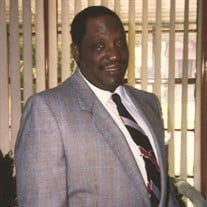 In Loving Memory Of: Our beloved James L. Moore or "Stubby" as he was called by old friends growing up made his transition peacefully asleep in bed at home. James had been saying he was tired all summer long when asked how he was doing. He wasn't happy with the quality of life he was experiencing or enduring with his declining health. James was independent, strong-willed and determined to help himself until the Good Lord called him home to be at peace and rest his soul at 88 years old. James was born in Birmingham, Alabama on June 30, 1933 to Lemon Works and Della Moore whom passed away when James was 18 months old. His dad partially raised him along with his mother until Jame's maternal grandmother, Lola Pitts brought him to Detroit, Michigan to be raised by her and his mother's twin sister, Deloris Pitts. During this time James accepted Christ at an early age. James attended Detroit Public Schools and Chadsey High School until the 11th grade. He then dropped out of school and joined the U.S. Army at the age of 17 years old in 1950. He was in the 82nd Airborne Unit and was honorably discharged in 1953. James loved all sports and briefly played on a softball team until someone ran into him and broke his foot. He was an avid fan of his hometown teams however, the Tigers, Lions, Pistons, MSU and U of M as well. He kept up with all the college games, girls teams and Olympics. As a hobby he collected old and rare coins. He also cared for his pet dogs ChiChi (deceased) and Mitzi. James worked for the U.S. Postal Service as a semi-tractor trailer truck driver for 25 years until his retirement due to his heart condition. He then took on a less stressful job at Forest City Enterprises as a custodian at Bowin Place Residence for Seniors until his retirement after 10 years. James was joined in holy matrimony to his beloved "Dot" Dorothy M. House for 58 years. They have one son, Nathan Cedric Moore. Nathan loved his "Pops" as he so affectionately called him, and his "Pops" returned the love by spoiling his only child. James loved family and he was a wonderful husband and provider, uncle, brother and friend. James had a humble spirit, was generous and compassionate. He would do anything for anyone and was a loyal and good friend to many who liked and loved him. He was a great-grandfather and he especially loved his siblings. He will truly be missed by those who knew him. James was preceded in death by: his 2 grandmothers, maternal and paternal; 2 aunts of Detroit, Deloris, Bennie Mae and one aunt from California. His stepmother, Elna Works of New Castle, AL; father, Lemon; sisters, Mary (AL), Debra (NJ) and Peggy (NJ). Survivors include: 3 granddaughters, Nicole, Natasha and Winter Thomas of California. Sisters, Carolyn Pickett (New Castle, AL), Barbara Thompson (AL); brothers, Lorenzo Works (KY), Jan (MI), Milton (AL) and Jerry Works and wife Charlotte (NJ); and a host of other family members and friends.

In Loving Memory Of: Our beloved James L. Moore or "Stubby" as he was called by old friends growing up made his transition peacefully asleep in bed at home. James had been saying he was tired all summer long when asked how he was doing. He wasn't... View Obituary & Service Information

The family of Mr. James L. Moore created this Life Tributes page to make it easy to share your memories.

In Loving Memory Of:
Our beloved James L. Moore or &quot;Stubby&quot; as...

Send flowers to the Moore family.