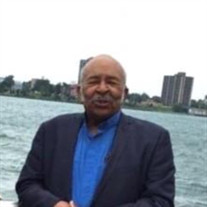 In Loving Memory Of Hiram Hillery Jones was born on November 24, 1928, in Albany, Georgia to Arnold Jones and Jessie Belle Hillery-Jones.  In 1946, at the age of 18 years old, he moved to Detroit, Michigan due to numerous opportunities for work in Michigan.  In 1949, he married the late Neoma Milledge and from that union Hiram and Neoma were blessed with three (3) children.   In 1950, Hiram was drafted to the United States Army and served in the Army Medical Corps, until his discharge in 1953.  Hiram and his family served the Lord under the leadership of the late Pastor O.G. Hayes of Bethlehem Temple in Inkster, Michigan and was called to the ministry a short time later.  Hiram and Neoma were led by the Lord to serve under the leadership of his father-in-law, Pastor Leander Milledge at New Hope Apostolic Temple in Detroit, where he attended and served under Pastor Milledge for several years. After Pastor Milledge retired, he became pastor of New Hope for over 40 years. For many years, he conducted catechism classes and a radio broadcast for 20+ years. The ministry also included a television broadcast from his home which transitioned to in studio broadcasting. In addition, New Hope fed the disadvantaged, provided Back to School supplies to students in the community and led many people to Christ including mentoring and teaching of younger ministers.   Hiram was elevated from Pastor to Bishop on June 12, 2016, by Bishop James Bowman. Prior to his retirement in 1988, Hiram was employed at General Motors, Detroit Diesel Allison, for 25 years. In his spare time, he enjoyed the great outdoors and was fondly referred to by his nieces and nephews as the “Great Outdoorsman,” as he loved fishing, boating, hunting and surrounding himself in nature just to relax. He is best remembered by his infectious sense of humor and ability to laugh at himself and situations which fostered the positive attitude that he maintained, along with an ability to dream up business opportunities well into his senior years. As a dad, he imparted discipline and unconditional love to his children, while sharing the Word of God. He was loved and considered a father figure by many. He transitioned on Monday, August 2, 2021 and is survived by his wife, Myrtle Jones. He is cherished by two daughters, Norma Jones-Houze (husband John P. Houze); son, Hiram A. Jones, (wife, Barbara A. Jones); daughter, Karyn Jones-Alexandre (husband, Jacques M. Alexandre). Also, (4) grandchildren: Carmen Jones, Tenisha Jones, Jonathan Jones and Jason Alexandre. He is loved by stepdaughter, Tanesha Barkley; step-grandson, Reginald Barkley and (10) nieces, (5) nephews; (1) brother-in-law, William McMillian and (1) sister-in-law, Elizabeth Milledge.

In Loving Memory Of Hiram Hillery Jones was born on November 24, 1928, in Albany, Georgia to Arnold Jones and Jessie Belle Hillery-Jones.  In 1946, at the age of 18 years old, he moved to Detroit, Michigan due to numerous opportunities for work... View Obituary & Service Information

The family of Bishop Hiram Hillery Jones created this Life Tributes page to make it easy to share your memories.

In Loving Memory Of
Hiram Hillery Jones was born on November...

Send flowers to the Jones family.