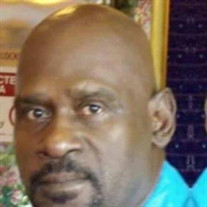 In Loving Memory Of: Gary Rhodes arrived on planet earth in Detroit, Michigan on February 24, 1954. He was the first child of four to be birthed into the union of his parents, “Guy and Martha Rhodes.” Years after Gary’s birth, his three siblings, “ Guy Douglas, Linda, and Marcetta” were birthed into this union. Gary accepted his fellowship with Christ at an early age. Gary attended Detroit Public Schools. He graduated from Cooley High School in 1972. After graduation, Gary was persuaded by enthusiasm to learn more computer skills. His enthusiasm led him to attend Wayne County Community College in Detroit, Michigan and Control Data Institute in Southfield, Michigan. At Wayne County Community College, he enrolled in a Basic Computer class with hands on training. Gary loved this class, and was successful in achieving more skills. He received a certificate in Basic Computer Skills. After graduating from Wayne County Community College, he attended Control Data Institute and received a certificate in Computer Science. Gary was employed on several jobs prior to his employment with General Motors Corporation where he remained until he retired. Like father, like son, Gary was a magnificent dresser. He knew how to coordinate his wardrobe for any occasion, “Sports, Mod, or Classic.” Gary found pleasure in posting on Facebook. Facebook was entertainment to him. His passion was taking pictures and videoing. He loved, adored, and cherished his grandchildren and posted videos and pictures of them on Facebook daily. Gary’s favorite outdoors pastime activities were riding his motorcycle, fishing, traveling, cruising, bowling, barbecuing, playing cards and playing with his fur babies. He looked forward to attending family events. Gary has three children from previous marriages, “Germaine, Ana and Barry.” In 1996, Gary and Phyllis united in marriage and begot two sons, “Pierre and Ahmed.” In 2012, Gary, his wife, and their fur babies relocated to Jacksonville, Florida. In Jacksonville he expressed his passion for fishing daily, especially early morning fishing. He was referred to as “The Fisherman” and he loved that title. Yes indeed, whatever fish he caught were posted on Facebook! Gary’s love for his mother was endless, he communicated with her daily by phone, text, or video. As planned, every summer Gary accompanied by his wife and their fur babies, drove from Jacksonville to Detroit, especially to visit his mother and grandchildren. Several years after relocating to Jacksonville, Phyllis' health began to deteriorate slowly causing disabilities that required the assistance of a wheelchair. The doctors, nurses and health team members assisted with her health care services, but her husband Gary was “THEE” Master Caregiver, his dedication was “Far, Far” beyond explanation!!! (Gary took Phyllis to be his wife, for better, for worse, in sickness and in health.) On March 28, 2022, Gary laid down his tired, visible body in exchange for his invisible form and instantly rose above his infirmities. He was preceded in death by his father, Guy Rhodes; two brothers, Guy Douglas and Timothy. Gary leaves to cherish his memories: his wife of 25 years, Phyllis Rhodes; a strong, loving and caring mother, Martha Rhodes; one daughter, Ana Rhodes of Arizona; four sons, Germaine Rhodes (Monika) of Michigan; Barry Rhodes (Carlotta) of Michigan; Pierre Jackson (Nicole) of Virginia and Ahmed Jackson of Michigan; two devoted sisters, Linda Rhodes of Michigan and Marcetta Rhodes Gaines (Spencer) of Florida; one sister-in-law, Vernita Matthews (Ricardo) of Florida; two brothers-in-law, Spencer Gaines and Raphael Henderson of Florida; six aunts; three uncles; twenty grandchildren; two fur babies, Samantha and Freebie; and a host of relatives and friends.

In Loving Memory Of: Gary Rhodes arrived on planet earth in Detroit, Michigan on February 24, 1954. He was the first child of four to be birthed into the union of his parents, &#8220;Guy and Martha Rhodes.&#8221; Years after Gary&#8217;s birth,... View Obituary & Service Information

The family of Mr. Gary Rhodes created this Life Tributes page to make it easy to share your memories.

In Loving Memory Of:
Gary Rhodes arrived on planet earth in Detroit,...

Send flowers to the Rhodes family.