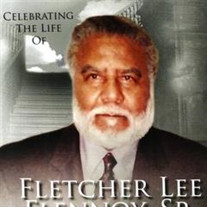 The Life of Fletcher Flennoy, Sr. Fletcher L. Flennoy was born on June 22, 1931 in Roba, Alabama to parents Jimmie and Lilla Flennoy. He was the middle child, as one of nine siblings. He was preceded in death by his parents and siblings Lenard, Glenn, Nathaniel, Jimmie, Winston, and Charles, and his son-in-law, Cody (Kim) Barnes. Commitment to Christ At an early age, Fletcher confessed Jesus Christ as his personal savior. He was baptized at Sweet Pilgrim Baptist Church in Roba, Alabama and later became a proud member of Pure Truth Bible Church (PTBC) in Detroit, Michigan. He was especially proud to be a PTBC member where his son serves as pastor. At PTBC Fletcher supported as many activities as possible, from being a founding member to helping build the church through its several physical moves. He was a prayer anchor for communion every first Sunday. Finally, he was able to see God’s plan for PTBC in a stationary building. Education and Work History He attended Macon County Training School in Roba, Alabama. After graduation, he relocated to Detroit, Michigan and worked for General Motors Chevrolet division as a grinder. In 1953 while working for Chevrolet he was drafted into the United States Army. He served during the Korean War and was honorably discharged as a corporal. Upon returning home to Detroit, Fletcher went back to Chevrolet and was promoted to inspector. During the Fall and Winter months Fletcher would go back to Alabama to attend Tuskegee Institute’s trade school for plumbing, and work for Chevrolet during the summers in Michigan. He worked with his cousin, Jasper Watts, to receive his journeyman pipefitter/plumber status. In 1964, Fletcher was hired by Ford Motor Company as a pipefitter. He worked for 37 years at Ford and retired as a pipefitter leader in 2001. Marriage to Rudene On August 24, 1960 he married the love of his life, Rudene Darty. From their union came four children. He loved his family and was a true family man. Their marriage as a hard-working and supportive couple has been a model for the family. Fletcher and Rudene recently celebrated over 61 years of marriage with family and friends. Following the event, Fletcher said “I’ve had my funeral because I was surrounded by all the people who loved and cared about me tonight and I was able to see it.” Hobbies Fletcher had that southern hospitality. No one left his house hungry. He was an expert griller. His ribs were fantastic and highly desired by the entire family. He even grilled mouth-watering corn in the husk. His tasty breakfasts spanned generations. The grandkids would spend the night just for breakfast in the morning, especially the pancakes. Fletcher was also an avid gardener. He grew colorful tomatoes, cucumbers, red peppers, greens, strawberries, and much more. Out of the kindness of his heart, he grew green beans along the fence so that his elderly neighbor could pick enough for a meal. Plants were a specialty and he was a favored customer at the local Frank’s Nursery. He would plant mums and hard-to-grow sunflowers, which turned out beautiful. He was also an active member of Mt. Paven Lodge #2 for many years. Those Left to Celebrate his Life The quiet, but strong Fletcher Flennoy, Sr. passed away peacefully after a brief battle with pancreatic cancer. His legacy is carried on through the memories of his loving wife, Rudene, his children, Fletcher (Regina) Flennoy, Jr., Kim Barnes, Tracy (Richard) Lee, and Domekia (Mark) Robson, his sisters, Lurlene (John) Feagin and Irene Carnes, his sister-in-law Cheryl (Charles) Flennoy, four grandchildren, two great-grandchildren, a host of nieces, nephews, cousins, extended family and friends.

The Life of Fletcher Flennoy, Sr. Fletcher L. Flennoy was born on June 22, 1931 in Roba, Alabama to parents Jimmie and Lilla Flennoy. He was the middle child, as one of nine siblings. He was preceded in death by his parents and siblings Lenard,... View Obituary & Service Information

The family of Mr. Fletcher Lee Flennoy created this Life Tributes page to make it easy to share your memories.

The Life of Fletcher Flennoy, Sr.

Send flowers to the Flennoy family.