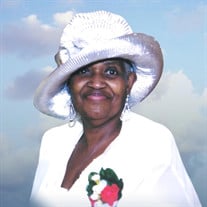 In Loving Memory Of: On December 4, 1946, Faustine Cooper was born in Jackson, Mississippi, to her parents, the late Willie and Iola Cooper. They moved to Detroit, MI, when she was 5 yrs. old. Faustine was the youngest of three daughters, Joann and Golena. As younger siblings often are, she was the most rambunctious of the Cooper girls. Her older sister, Joann Wedlow, preceded her in death on March 30, 2013. Faustine attended the Detroit Public Schools and graduated from Central High School in 1963. While attending Central high, she was a very bright and magnetic student. Historically, Faustine was active in numerous extra-curricular school activities, such as the aquatic girls’ swim team, school choir and sang opera. People were drawn to her throughout her life because she was fun-loving and spirited. She always met people where they were and accepted them for who they were! Faustine earned her bachelor’s degree in psychology from Mercy College of Detroit in 1987. She was a brilliant, humble, and tenacious person with a charismatic personality! Equally, she was personable, humorous, and a “social butterfly” well-loved by everyone. Faustine never met a stranger. She was a good Samaritan who served the needy, clothed the naked, fed the hungry, and was a mother to everyone. She was a friend to all! Faustine was a dynamic and virtuous mother to six well-rounded children: Seantwne-“Shawn,” Arssean- “Sean (deceased),” Franchott- “Frisky,” Dorenia-“Rita,” Aregenae-“Nene,” and Keniyiniate-“Kenny.” All six of her children relished the ground she walked on and sought her counsel daily! For many years, Faustine worked with women who were victims of domestic violence and abuse at Interim House in Detroit. Later, she worked at Vista Maria Home for Girls, working with young traumatized female teenagers helping them to overcome impediments and difficulties. Ms. Faustine was a living example of how to traverse life’s challenging circumstances, especially as a single mother raising six children in Detroit. Vista Maria and the young ladies she aided held an extraordinary place in her heart. She went above and beyond for them to ensure their needs were met until she retired from Vista Maria in the late 1990s. Faustine accepted Christ early in life. She attended and was a dedicated member of Immanuel Missionary Baptist Church under the leadership of Pastor Albert F. Marks, Jr. While attending Immanuel Missionary Baptist; she was a member of the church choir. In addition, she served as secretary of the Pastor Aid Committee. Faustine was faithful to her church and its members until her health began to fail, and she could no longer physically attend church. Nevertheless, during the past few years, while residing at the Shore Pointe Nursing & Rehabilitation Center, Faustine participated in singing gospel songs for the residents, evangelizing, and serving as president of her community floor, actively advocating for residents’ rights and concerns until her final days. Faustine was a fighter who promulgated for the rights and needs of others. She was a very motivational, inspirational, and astute person. Also, she was a mighty woman of God, equipped with His spirit, knowledge, wisdom, understanding, and great compassion for others! Faustine always stood by her convictions and beliefs and was never afraid to speak the truth, even if it hurt to hear it.

In Loving Memory Of: On December 4, 1946, Faustine Cooper was born in Jackson, Mississippi, to her parents, the late Willie and Iola Cooper. They moved to Detroit, MI, when she was 5 yrs. old. Faustine was the youngest of three daughters, Joann... View Obituary & Service Information

The family of Ms. Faustine Cooper created this Life Tributes page to make it easy to share your memories.

Send flowers to the Cooper family.