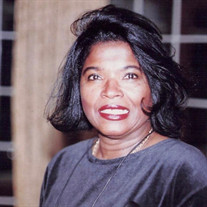 Celebrating the Life and Legacy of Evelyn Elmira Lucas Evelyn Elmira (Daniel) Lucas, affectionately called Nana, was born in Elizabeth, New Jersey, on July 22, 1929. She was the third of the four Daniel sisters of the late Allen and Braddie Daniel. At 16-years-old, Evelyn married her high school sweetheart, the Honorable William Lucas. Evelyn and William began their life’s journey together and would share 75 years of marital bliss. Evelyn attended Morris High School in Bronx, New York, and was a strong student and popular cheerleader. Evelyn was forced to leave high school early to give birth to her first child. This experience served as a catalyst for Evelyn’s future educational endeavors and later, as a tool of motivation for the academic success of her family. Evelyn understood the power of education and raised her six children with the same mentality. She placed her own aspirations and career goals on hold and instead directed her energies towards her children’s educational growth and upbringing. Evelyn’s sacrifice undoubtedly shifted the trajectory of her children’s and husband’s professional pursuits. Her selfless act allowed them to thrive at the highest level of their chosen professions. This ultimately resulted in the academic and career achievements of her children: Dr. Stephanie Lucas-Oney, Dr. William Lucas Jr., Dr. Patricia Ann Lucas, Police Sergeant Richard Lucas, Dr. Jo Ann Lucas, and John Mc Lucas. When circumstances allowed, she finally was able to continue her own education. Evelyn was accepted to Wayne State University and at times, was learning alongside her children in the very same classes. Evelyn double majored in Psychology and English and graduated with a Bachelor’s of Arts. She then attended Cooley Law School for two years but withdrew after the death of her youngest child, John. Evelyn gathered her strength and continued her education by obtaining a Paralegal Degree from the American Institute for Paralegal Studies. She began her legal career as a researcher for the 36th District Court and would later serve as an arbitrator in family and custodial cases. Evelyn was recognized for her tenacity and propensity to develop briefs against major entities and for malpractice cases. Additionally, Evelyn was instrumental in the success of her husband’s campaigns and his outstanding political career. Evelyn’s accomplishments extended to other areas. Evelyn was the founder and CEO of Lucas General Contractors LLC. She established the community initiative 9-1-1 Baby, a specialized program for pregnancy prevention and prenatal care. Evelyn launched Give Back, an advocacy and counseling program which supported families in need. Inspired by the impacts of her communal contributions and desire for knowledge, Evelyn returned to academia. At the age of 80, Evelyn obtained two associate’s degrees in Gerontology and Mental health from Wayne County Community College District in Detroit. As a Golden Key Scholar, Evelyn graduated Summa Cum Laude and was inducted into Phi Theta Kappa, an international academic honor society. Evelyn was a member of the Black Professional Women’s Association (BPWA), Bonded State Notary (BSN), Michigan Gerontology Association (MGA), and the American Association of Retired Persons (AARP). Evelyn was also a Lifetime Member of the National Association for the Advancement of Colored People (NAACP). Evelyn was an educator and lifelong learner. She taught courses as a substitute teacher and led classes at her local community center. Evelyn continued to attend seminars and training sessions to become a Specialist with the Medicare/Medicaid Assistance Program (MMAP), and was responsible for counseling seniors with their healthcare benefits and choices. Evelyn was an active member of Citizens for Better Care (CBC), advocating for the vulnerable by inspecting the living conditions of nursing facilities and foster care homes. Evelyn’s dedication to education and community advocacy was only outmatched by her character and God-given ability to connect with others. Evelyn was a generous, compassionate, and nurturing soul with a perceptive nature. Evelyn had a sixth sense of knowing what was needed at any given moment and used her gifts to offer comforting words and a stern voice of wisdom. Evelyn would often share her premonitions with others as a means to offer guidance, reassurance, and a sense of peace. Moreover, people were drawn to her. They felt safe confiding in Evelyn because she allowed them to be heard, validated, and supported. Evelyn was a God-fearing woman who loved the Lord. As she reflected upon her life experiences, she identified five key elements to live by. Better known as Nana’s Five Things, Evelyn preached the importance of God, Self, Family, Love and Discipline at every gathering and event. These five principles would serve to guide her family for generations. Evelyn Elmira Lucas peacefully transitioned to be with the Lord on February 2, 2022, at 2:00pm, in the comfort of her home. Evelyn was surrounded by her husband and family. Evelyn is survived by her husband (the Honorable William Lucas), her five children (Dr. Stephanie Lucas-Oney, Dr. William Lucas Jr., Dr. Patricia Ann Lucas, Police Sergeant Richard Lucas, and Dr. Jo Ann Lucas), 16 grandchildren, and 12 great grandchildren. In the words of Evelyn’s favorite songs, ‘She dreamed the Impossible Dream and She did it Her Way’. Those we love don’t go away, They walk beside us everyday. Unseen, unheard but always near, Still loved, still missed and very dear.

Celebrating the Life and Legacy of Evelyn Elmira Lucas Evelyn Elmira (Daniel) Lucas, affectionately called Nana, was born in Elizabeth, New Jersey, on July 22, 1929. She was the third of the four Daniel sisters of the late Allen and Braddie... View Obituary & Service Information

The family of Mrs. Evelyn Elmira Lucas created this Life Tributes page to make it easy to share your memories.

Celebrating the Life and Legacy of Evelyn Elmira Lucas

Send flowers to the Lucas family.