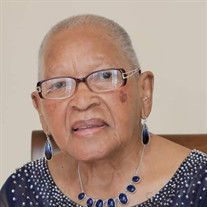 “Charm is deceptive, and beauty is fleeting; but a woman who fears the Lord is to be praised. Honor her for all that her hands have done, and let her works bring her praise at the city gate.” -Proverbs 31:30-31 ESTHER MAE BROWN STEWART was born to James and Alice Brown of Longville, Louisiana on April 5, 1928. Growing up with her big sister Dorothy, Esther was an avid reader and loved to bake. Ever committed to her education, Esther excelled academically in the DeRidder Public School System. The Brown family were dedicated members of Sweet Home Baptist Church, where Esther could be found ushering, participating in Sunday school, and singing in the choir. Yet, she made the most important decision when she turned 12 years old, when she accepted Christ as her Lord and Savior. That faith and commitment would carry her through her 93 years of life. It was love at first sight when Wyman laid eyes on Esther in DeRidder, Louisiana. Riding a horse on a hot summer day—he saw her as she sat on her front porch. After one year of dating he popped the question “Es, there are a lot of women I can live with, but YOU are the ONE I can’t live without.” Knowing that their love for one another was meant to be, they made it official and tied the knot on April 22, 1946 at the ages of 17 and 18. It was always their dream to have a big family filled with love, happy memories and reared in the Christian faith…and that they did bearing seven children Antsernette, Wyman Dennis, Paul Nils, Denise, Garth, Trina and Clive. In 1952, the Stewart family relocated to Detroit, Michigan, where Wyman got a job at Dodge Main and later worked and retired from Samuel Dickmen and Sons Construction. Esther took her role as mother and homemaker with deep sincerity. She made sure that each Stewart child learned respect, earned a good education and had full bellies with her favorite Sunday dinner—Roast beef, smothered with gravy, potatoes, carrots, onions, side of yams and cornbread and her infamous banana pudding and Kool-aid. When not working in their home, Esther could be found working faithfully in their church, Greater Raising Star Missionary Baptist Church under the leadership of the late Rev. James McCray. She served as the children’s choir director, church clerk, Sunday School/Vacation Bible School teacher, Sunday School Superintendent and on many other ministries. There is little she would not do in ministry. As her family continued to grow through the years, Esther found immense joy in taking care of her grandchildren and great-grandchildren. On December 22, 2008 she said goodbye to the love of her life, Wyman Stewart. Whenever she spoke of her partner of 63 years, she said “Wyman is my sweetheart” In her later years, Esther worked at Family Christian Development and Divine Child Christian Learning Centers, serving as a caretaker – she absolutely loved caring for children or “my babies” as she affectionately called them. On October 20, 2021 surrounded by her children, Esther Mae Stewart was called home fulfilling her earthly life’s mission of helping people and leading them to Christ. “I’m alright, I met that barefoot boy of Nazareth a long time ago. I met him on a Wednesday night in bible study. I told Rev. Harris I didn’t want to die and go to hell… he said, “Sister, you don’t have to” … I gave my life to Christ right then… I’m alright.” Esther M. Stewart She was proceeded in death by her husband, Wyman Stewart, parents, Alice Dunham and James Brown and sister, Dorothy Good (Ned Good). She leaves to treasure in her memory: Seven children, Antsernette Moncrief (William), Wyman Dennis (InSoon), Paul Nils (Crystal), Denise Hayes (Timothy), Garth (Kimberly), Trina Holmes (Reginald) and Clive (Tiffany). Her dear/loving cousin Vera Mathis, 13 grandchildren, 14 great grandchildren and a host of nephews, nieces, cousins, and friends.

&#8220;Charm is deceptive, and beauty is fleeting; but a woman who fears the Lord is to be praised. Honor her for all that her hands have done, and let her works bring her praise at the city gate.&#8221; -Proverbs 31:30-31 ESTHER MAE BROWN STEWART... View Obituary & Service Information

The family of Ms. Esther Mae Stewart created this Life Tributes page to make it easy to share your memories.

“Charm is deceptive, and beauty is fleeting; but a woman who...

Send flowers to the Stewart family.