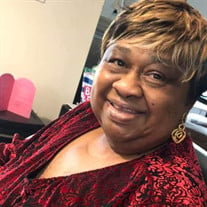 In Loving Memory Of Elsie Rhubinna Tarrance (Bean) was born on July 25, 1946, to the late James Gunn and Nadye Gunn in Danville, Virginia. She was the middle of three children. Her two brothers, Larry and Clyde, preceded her in death. Elsie attended Danville Public schools and graduated from Southside High School in 1963. She enrolled in Virginia State College (now Virginia State University) and earned a bachelor’s degree in Education. After graduation from college, she and two of her classmates, Rosetta and June, were recruited by Detroit Public Schools to teach. Elsie, June, and Rosetta relocated to Detroit and began their careers as teachers in 1968. After relocating to Detroit, her life as a teacher, wife, mother and grandmother evolved. Elsie was baptized at an early age in Danville, Virginia. After she relocated to Detroit, she joined Russell Street Missionary Baptist Church and attended regularly until she relocated to the westside of Detroit. Elsie met Jesse Tarrance in 1969, and they were married in 1970. Consequently, they became proud parents of Tiffany and Darryl. In addition, Elsie was the proud and loving grandmother of two granddaughters, Malia, and Bali’Monroe. Malia and her grandparents were an extremely close trio. Elsie was a kind, mild-mannered lady who loved to talk and laugh with family and friends. When Elsie was younger and healthier, she was an avid bowler and participated in many tournaments along with Jesse. Also, she enjoyed reading, playing games on the computer, and watching her favorite television shows. During her thirty-three years of teaching in Detroit Public Schools, she taught at Durfee Middle School, Southwestern High School, Winship, Southeastern High School and Osborn High School. In 2001, Elsie retired due to health issues. Elsie leaves to cherish sweet memories: her loving husband of fifty-one years, Jesse; daughter, Tiffany; son, Darryl; mother, Nadye Gunn; two granddaughters, Malia and Bali; five sisters-in-law, Clara, Gussie, Mary, Sallye, and Bobbie; one brother-in-law, John; a host of aunts, uncles, nieces, nephews; two special long-time friends, Laura “Rosetta” Royster and June Smith who loved Elsie like a sister.

In Loving Memory Of Elsie Rhubinna Tarrance (Bean) was born on July 25, 1946, to the late James Gunn and Nadye Gunn in Danville, Virginia. She was the middle of three children. Her two brothers, Larry and Clyde, preceded her in death. Elsie... View Obituary & Service Information

The family of Mrs. Elsie Ruhbinna Tarrance created this Life Tributes page to make it easy to share your memories.

In Loving Memory Of
Elsie Rhubinna Tarrance (Bean) was born on...

Send flowers to the Tarrance family.