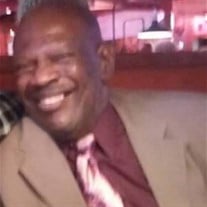 In Loving Memory Of Elijah Haywood Smith Sr. was born on March 22, 1948 in Palestine, Arkansas to Ethen James Smith and Addie Lou Smith (McKinney). He was the second oldest of 14 children and learned responsibility and hard work at a young age. He often spoke of how he helps take care of his brothers and sisters. Elijah’s parents decided to leave the South for a better life. They relocated to Ohio for a short period of time, but decided to make their home in Michigan. He was educated in the Highland Park School system. This is where he met the love of his life Emma Mae Smiley. They eventually married and to this union four children were born. In order to provide for his family, he got a job at General Motors where he worked for over 30 years, until he retired. While working at GM, Elijah met Minister Roosevelt Black.  This encounter would change his life forever. Minister Black started witnessing to him, about being baptized in Jesus’ name and being filled with the Holy Spirit. Elijah did not want to hear anything the Minister had to say. He was content at the small church he attended for years, Greater Emmanuel on Sturtevant in Highland Park. The Lord began to deal with Elijah, unaware to Elijah. He was going about his normal routine, which meant it was a Friday, so he was going to the gym to workout. All while he was packing his gym bag and preparing, he kept hearing, “You’re going to Solomon’s Temple, the church Minister Black told you about. He said to himself, I must be losing my mind, I’m not going to that church! I’m going to work out, guess what he went to that church. On October 2, 1982 Elijah received the gift of the Holy Spirit and joined Solomon’s Temple. Elijah was on FIRE for the Lord and was very active in serving God’s people. After receiving Salvation, Elijah brought his wife, children, siblings and friends to the Lord. He sang in the Radio and Brotherhood Choirs, tarried with souls, served communion to the sick and shut in at nursing homes and helped out on the Nursing Guild. He also enjoyed traveling to the COOLJC Conventions. Elijah enjoyed cooking, ragging (shopping at thrift stores), singing, decorating, and fashion. He modeled in his younger years and dabbled in modern dance. He enjoyed plays, dance and ice-skating performances. He was a very caring, gentle and loving man who would help anyone.    My siblings and I called him Daddy, some called him June Bug, Rev, Eli and even Old Dude (affectionately by Eli Jr.).  God called him His child and took him back home on Saturday, February 19, 2022.  He leaves to cherish his memories:, his children, Rachelle, Rashonda (James), Elijah (Reva) and Ethan (Timkeydia); 19 grandchildren, 8 great-grandchildren, 5 brothers (1 preceded him in death), 4 sisters (3 preceded him in death) and a host of nieces and nephews.

In Loving Memory Of Elijah Haywood Smith Sr. was born on March 22, 1948 in Palestine, Arkansas to Ethen James Smith and Addie Lou Smith (McKinney). He was the second oldest of 14 children and learned responsibility and hard work at a young age.... View Obituary & Service Information

The family of Mr Elijah Haywood Smith created this Life Tributes page to make it easy to share your memories.

In Loving Memory Of
Elijah Haywood Smith Sr. was born on March...